Global phenomenon Bring Me The Horizon resume the next chapter of their hugely successful journey with the release of a new single entitled sTraNgeRs out now via RCA / Sony Music Australia. The track is the second to be released from their critically acclaimed POST HUMAN EP series.

Oli said “The song came out of a long writing trip in LA, and as soon as the lyric ‘we’re just a room full of strangers’ came it took on such a deeper double meaning – how it would feel to be performing it live as that’s what it is.. all strangers connecting on this mad level.. and that it was like rehab.. Coming out of lockdown and the pandemic, everyone is recovering from something and I’m so aware that so many people struggle daily with differing traumas, and just wanted to stress that they’re not in this alone… and we’re a community here to help each other”

The band wanted to share these very personal mental health journeys to help and inspire others and asked fans if they would like to anonymously contribute and play a part in this very special process. The response was overwhelming and these  stories formed the narrative behind the official video and some very unique short form clips, which have been revealed across the band’s socials this past week. These shorts formed the haunting and cinematic mini film that accompanies sTraNgeRs, which gives a surreal glimpse into this very personal world.

Bring Me The Horizon have had an exhilarating few years with a UK Number 1 and a Number 3 in Australia for the first instalment of their EP POST HUMAN: SURVIVAL HORROR, a much talked about performance with Ed Sheeran at The Brits in February, as well as a plethora of prominent features with the aforementioned Ed Sheeran, Tom Morello, Machine Gun Kelly and Sigrid to name a few. They now firmly sit in the top 500 most streamed artists globally on Spotify and their year high continues with a special curated festival in Malta that took place in May, the upcoming release of EP two and a headline appearance at Reading & Leeds Festival in August.

With another year of impressive achievements under their collective belt, Bring Me The Horizon look set to continue their successful mission to put heavy music on the map on a global level and beyond!

They’ll be heading back to Australia in December to headline the Good Things Festival. 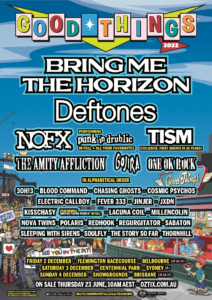 About Bring Me The HorizonBRIT and Grammy-nominated, multi-platinum-selling quintet Bring Me The Horizon are one of the most successful rock bands to emerge from the UK; selling over 5 million albums globally to date, playing sold-out shows in over 50 countries, including two sold out nights at London’s O2, a night at The Forum in Los Angeles, wowing a traditionally non-rock crowd at Glastonbury Festival in 2016 and 2018 and a headline slot at 2022’s Reading & Leeds Festival. They kicked off their POST HUMAN era in 2020 with the release of the first of four EPs aptly titled POST HUMAN: SURVIVAL HORROR.

The critically acclaimed release debuted at Number 1 on the UK Album chart and Number 3 on the ARIA chart. 2022 saw them appear at the BRIT Awards where they joined Grammy award winning singer-songwriter Ed Sheeran for an electrifying performance of Bad Habits. The group released their gold-certified sixth studio album, amo, in 2019, which debuted at Number 1 in 17 markets including Australia and was named “one of the most anticipated albums of 2019” by Billboard, it also garnered the band their second Grammy nomination for Best Rock Album, after the LP’s first single MANTRA earned them a nod for Best Rock Song in 2018. The Sheffield 5-piece also received their first BRIT Award nomination for Best Group in 2021. They have now also amassed over 1 billion video views on YouTube and are in the top 500 most streamed artists globally on Spotify. Bring Me The Horizon are vocalist Oli Sykes, guitarist Lee Malia, bassist Matt Kean, drummer Mat Nicholls, and keyboardist Jordan Fish.

Stay Connected With Black Of hearts