Inspired by an eclectic upbringing in Reunion Island, producer and multi-instrumentalist NASAYA is a versatile electronic crossover artist. Following his 2021 EP ‘PIRILAMPO’ with MARO, NASAYAreturns to Foreign Family Collective with his new single ‘CIEL’.

Berklee College Of Music graduate and multi-hyphenate musician NASAYA brings a refreshing perspective to the electronic music landscape. Born and raised by the way of Reunion Island – a French island in the Indian ocean –  NASAYA draws influence from the culturally diverse landscape of his homeland. Inspired by the breeze and easy-going nature of the island, his signature style borrows from jazz, experimental dance music, hip-hop, pop, and even classic rock.

With releases spanning labels like Majestic Casual, Concord Records, and ODESZA’s Foreign Family Collective, NASAYA’s lush sound is home to some of music’s most prominent record labels. His captivating musical prowess has been lauded by media heavyweights like Pigeons & Planes, Indie Mixtape, Billboard, Ones to Watch, SPIN, NOCTIS Magazine, BBC Radio 1, Triple J, and many more. In addition to a laundry list of press accolades, NASAYA has landed sync deals with Patagonia, Amazon Prime, Hulu, Netflix, American Eagle, and Mercedes, just to name a few.

At the heels of a successful 2021 thanks to his collaborative ‘PIRLAMPO’ EP with MARO and a tour as direct support for Ford’s The Color of Nothing tour, NASAYA returns with a new creative edge on his latest single ‘CIEL.’ The edgy, experimental electronic cut is a refreshing contrast to his work on ‘PIRILAMPO’ with its refined, minimalist sound design and speedy synth work. A cerebral listening experience armed with his familiar textures, this timely NASAYA original arrives just ahead of his upcoming tour as direct support for ODESZA on their Last Goodbye tour.

“CIEL marks a bit of a departure from music I previously released. I moved from the US to Paris in 2020 and the change of scenery kind of changed the way I write music and how I wanted this project to evolve. Also, being stuck at home for these 2 years it made sense to write music all by myself. The track is definitely more ‘clubbier’/darker than what I previously released – living in Europe for the first time I started being more influenced by music like garage/breakbeat, jungle, techno etc..

Writing music completely on my own is me going back to my ‘roots’ in a way – (I started writing music to jazz/fusion instrumental songs on guitar) – I found out that the way I can only express certain emotions is through writing instrumental music. I think it’s one the first times I was making songs that felt truly personal to me. I’m very obsessive with production and sound in general so it feels great to channel my emotions and thoughts into something where I have complete creative control on everything – writing, producing, mixing/mastering to even the designs of the artworks etc. The song can have different meanings, for me it captures a melancholic and introspective state of mind that I was feeling at the time — ‘CIEL’ means ‘Sky’ in french.” – NASAYA 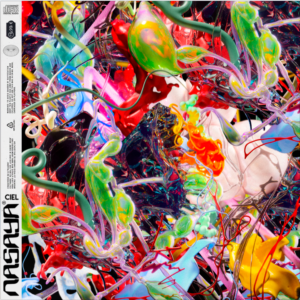