There’s a movement that has been around for decades. A relentless, dominant, monumental movement that aims to capture the attention of the general public. To break down the barriers of misogyny, discrimination and violence. To stand for something greater than oneself.

BOYSCLUB is the result; the punk band; the voice; the change that they want the world to make. Influential with their words, BOYSCLUB stokes the coals of a fire that needs to grow and burn and transform, bringing the norms of society down and rebuilding into universal acceptance, tolerance and compassion for every human being.

The release of their debut single, “She, the Atrocity” focuses inward, with lyrics written by guitarist, Ava Noir. Touching on her experiences with gender dysphoria and the lengths she feels she needs to go to as a transgender woman to fit the mould society says she should, and how, in her search for love, she hopes to be seen as a real woman while at times not fully believing it herself.

This track, the follow up to She, the Atrocity (which racked up over 30k organic views in less than a week on the band’s Facebook page) is sophomore single LOVESICK. The track ties in closely with the debut, reflecting on addiction as a tool to cope with the person in the mirror. LOVESICK is an anti-party song. The verses address the grim realities of addiction to, and withdrawal from, IV drug usage and body issues. It is a glimpse into the life we live in public and to what is behind the scenes in our daily lives we all live. The video touches on a surrealist approach to these things, on how humans try to cope with such a reality on addiction.

For fifteen years, Sera Doll (lead singer / guitarist), Ava Noir (guitarist), Lou Harbridge (bassist) and Skarlett Saramore (drummer) have been an active voice in the Australian music community. Recently combining their shared passion – equality, their love of heavy music to create something powerful – and to stand for something more than themselves.

Focusing their music on topics from queer empowerment, domestic violence, violence against women and drug addiction, their shared experiences and skill sets create an equally impacting sound, a grunge-punk that they have made entirely their own. BOYSCLUB are preparing to release their debut album in early 2021, exploring the relationship between the band members and the society they live in. 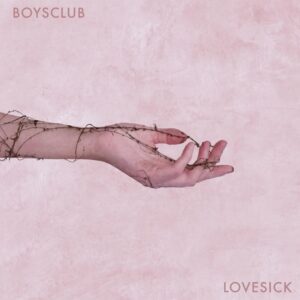