OF CRAZY FOR YOU

AND PLAY IT FROM START TO

FINISH FOR FIRST TIME ON AUGUST

“Filtering Sixties girl-group sounds through the grittiness of punk, Crazy for You was replete with songs that felt both pleasingly retro and refreshingly current…The whole record almost sounds like one artfully blurry dream, bursting with Cosentino’s honeyed vocals and Bruno’s Beach Boys–inspired groove.” Rolling Stone, July 27, 2020

“Crazy For You stands up as a crazy good pop album and the perfect summer soundtrack. Best Coast’s debut album came in the middle of the summer of summer, a time when music trends were dominated by beach aesthetics and waterlogged sounds. But while Crazy For You languishes in a depressive haze, it manages to sound like unfiltered sunshine. The songwriting is sharp and honest…” Stereogum, July 27, 2020

Los Angeles duo Best Coast – comprised of Bethany Cosentino and Bobb Bruno – are celebrating the tenth anniversary of their landmark debut album, Crazy For You , which was officially released a decade ago today on Mexican Summer.

In honor of the album’s tenth birthday, Cosentino and Bruno have put together all sorts of special, celebratory things, including a performance filmed in quarantine of the duo playing the album from start to finish for the first time ever. The night will also feature special guests, including Hayley Williams of Paramore , Mark Hoppus of Blink-182, Lauren Mayberry of CHVRCHES , and lots more, as well as archival footage from 2010/2011, interviews with Bethany and Bobb, and a very special, intimate meet and greet for 30 fans only.

The whole shebang happens on  August 14th at 6 pm PDT via Seated (Sat August 15th 11am for those downunder!) . Tickets for the online show are on sale NOW; click HERE to grab them.  All tips from the event will be donated to The Loveland Foundation , bringing opportunity and healing to communities of color, especially to Black women and girls, by helping provide financial assistance to those seeking therapy and beyond.

Says Cosentino, “ Crazy for You truly changed my life. I was 22 years old, feeling so lost, confused and anxious – and so I wrote a bunch of songs about it. I had no idea the album would impact people the way it did back then, and I had no idea its legacy would last a decade later. When I started this band, I had no expectations of what would happen, I just wanted to make and play music with my friend. Bobb and I feel so lucky to have been able to do everything we have over the last 10 years, and we are so appreciative of our fans who have stuck with us since the beginning.”

Click HERE to get a sneak peek of what’s to come at the Crazy For You birthday party on August 14th.

BEST COAST “CRAZY FOR YOU” TRAILER

The band will also be releasing limited edition merch for the anniversary as well, including face masks and t-shirts with Crazy For You -inspired artwork (and yes, that includes Snacks the Cat). Click HERE to check everything out.

Best Coast was formed in 2009, and, after a string of 7-inch and cassette-only singles, the band released their debut album, Crazy For You , in 2010.  Crazy For You became an unexpected commercial success following internet buzz surrounding the duo. After spending much of 2011 on the road playing festivals and touring, they released their sophomore effort, The Only Place in 2012, which was produced by acclaimed producer Jon Brion. In 2013, they released an EP, Fade Away, followed by their third, critically-lauded studio album, California Nights , in 2015. Their newest creation, Always Tomorrow , was released to widespread acclaim in February 2020. 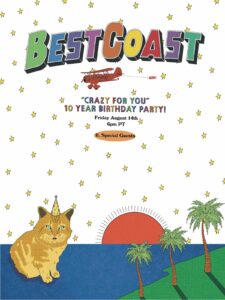