“While her most recent single and title-track ‘Spells’ exhibited a unique ability to calm, ‘21’ dives deep into an industrial pop sound that does quite the opposite. From the very first note, we’re introduced to a frenetic yet uplifting energy that’s glittered with synth and glitching electronica. Elmo’s smooth vocals glide effortlessly above the chaos, but there’s a darker mood simmering below too. – Deafen County

Sydney-based singer/songwriter/producer Elmo Aoyama is back with new track ’21’, out this Friday July 31. It’s the second single from her debut EP ‘Spells’, due August 26 via Dinosaur City Records and Geertruida (EU/UK).

Listen to ’21’ now via Spotify, Apple Music or Bandcamp.

“21 is about a friendship long lost and slightly salvaged since. I watched the rise and deepening of their troubles and was concerned for their inevitable fall. At the time the only solution seemed to be for them to remove themselves from their situation, to leave and heal.” Aoyama says of the song. “Regardless of their situation, people often go through similar problems. The reaction to these problems is a matter of context and perception.”

While the theme of the song may sound sombre, the production is confident and uplifting. Resonant electronic drums underpin fluorescent synths and Elmo Aoyama’s sweet pop vocals, which tell the same story from two different perspectives (one in English, the other in Japanese).

Born in Tokyo and based in Sydney, Australia, Elmo Aoyama (best-known for her contributions to Sydney band Big White) is quickly making a name for herself with this new solo project.

With a unique brand of pop that is warm and easy to love, Elmo shared her debut single ‘Spells’ last month and has since turned heads at Fader, NME, Weirdo Wasteland, Mindies, 3RRR and FBi Radio, among others.

Taking inspiration musically from the likes of The Knife, Dirty Three, Yann Tiersen, YMO, Miharu Koshi and Yosui Inoue, debut EP ‘Spells’ was self-recorded at Elmo’s Blue Mountains home back in 2017, where she had no internet, no phone service, a waterfall down the road and west facing windows backing onto bush. Elmo printed off a limited run of home-made CDs and took them to Japan where she played a run of shows, selling out the CDs and abandoning the project for a few years before resurfacing the tracks for a full release in 2020.

The songs that make up ‘Spells’ reflect on events significant and insignificant to Aoyama, exploring themes of love, life, death, loss and politics.

“When people are in transit they’re in their own vacuum. They think about where they came from, where they’re going, what they did and what they’ll do next. If it’s a familiar route fragments of memory are stored along the way which is triggered when you reach that same spot. Passing a corner or glancing up at a street sign might remind you of who you were with or what the weather was like last time. Spells is a collection of songs written during transit through automatic writing. Each song represents a time already passed which will never be revisited again. The songs include both significant and insignificant events, fleeting thoughts and feelings which deal with themes of life, death, loss and political comment.” Elmo says of the EP.

‘Spells’ (EP) will be released on August 26 via Dinosaur City Records and Geertruida. 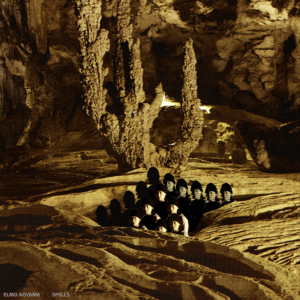 “This is so lovely. I love every one of those synth sounds and the fact none of them take away from the song’s underlying mood.” – Dan Condon, triple j  ★★★★

“[In Spells] Elmo has measured out each sonic ingredient perfectly – from the delicate and ethereal top notes to the a squelchy modulated undercurrent and even her own own buttery smooth vocal delivery.” – Weirdo Wasteland