Ben Gillies has followed up his exciting debut solo single “Breathe In, Breathe Out”, with a second release “One Foot In Front Of The Other”. The dark, folk-rock influenced track depicts an existential tussle, within ourselves and with each other, and features infusing jazzy saxophone and percussion with his signature husky vocal styling’s.

In this dark fairytale of a song, with its echoes of Synchronicity-era Police, there’s no resolution but plenty of intrigue. It’s a mesmerizing alt-rock track that draws on keys and sax to build an atmosphere of almost-menace. The song’s title is a motto for life: put one foot in front of the other. Keep going. The music reflects this: it has patterns yet it also builds but never yields, even at the end.

The Silverchair drummer has been working on his forthcoming body of music for the last five years, and his two singles present a decisive statement of Gillies’ unique sound.

“No matter what’s put in front of you, keep going, push forward,” said Gillies. “It’s like when you’re walking directly toward someone in the street and you need to pick a side. Well, when it’s yourself, you already know where togo. Just get out of your own way. But don’t forget to smell the roses.”

Gillies’ debut solo track, “Breathe In, Breathe Out” was premiered by Double J in September, to instant acclaim from music media around the country, including praise from NME, Rolling Stone, Tone Deaf, The Music, Scenestr and WSFM.

Ben Gillies started learning to play drums at the age of eight, and quickly discovered a love of performing, becoming the drummer in the school band. He was still in primary school in Newcastle when he formed a band with a friend, which initially performed rap songs.

It would undergo several name changes, add a member and take on a distinctly different musical direction before it became Silverchair. Silverchair released five albums (all of which reached #1 on the Australian charts), and would go on to win 21 ARIA Awards, the most won by any artist. A dynamic and irresistible live act from the start, Silverchair toured the world – and Australia – several times.

For his debut solo project, Gillies drew upon his experience with not only drums, but also guitar and piano – all instruments he has played since childhood. Going into the studio with Byron Bay-based producer Jordan Power, Gillies found a collaborator who, he says, knew how to push him to get the best out of each track and also gave him the freedom to explore, to the point that some songs were created in the studio.

Gillies sings and plays many of the instruments on the tracks, and has also called in some musician friends, including Scott Aplin, music director for The Voice, who at one time played keyboard in Silverchair, and Pat Davern, guitarist for Australian band Grinspoon.

These exalting tastes of Gillies’ solo project promise a unique and accomplished new direction for the artist, drawing on his past experience and personal love for performing to bring still more world-class music to the forefront.

“One Foot In Front Of The Other” is available to stream on all platforms now. 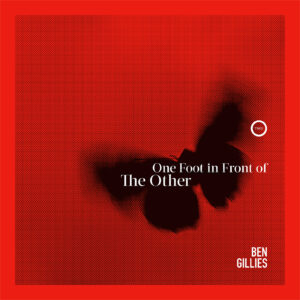