Prolific Canberra-based singer/songwriter Aya Yves has just released her EP “What We Look Like With the Light On.” The EP follows Yves’ successful 2020 singles “(in)Sanity,” “Smart Girls,” “Dear E.” and “Brave,” and puts Aya Yves’ true artistry on full display. Her powerful vocal abilities and phenomenal songwriting talents combine to make her one of the most exciting Australian acts on the scene.

And with more reason to celebrate, Aya Yves has been announced as a finalist for the Vanda & Young Global Songwriting Competition Top 40.

LISTEN TO “WHAT WE LOOK LIKE WITH THE LIGHT ON” HERE

The EP opens with “(in)Sanity,” which has amassed 30,000 streams in just two months, received nationwide radio play on triple j’s Home and Hosed and led to performances for Isolaid, The Tait Show, Marx Matinees and Live In Ya Lounge. The track featured the work of talented producer Xavier Dunn (Jack River, CXLOE, GRAACE, Carmada, Peking Duk), whom Yves‘ also collaborated with on “Smart Girls.”

“Einstein is credited with saying, ‘Insanity is doing the same thing over and over again, but expecting different results’,” said Aya, “I wrote (in)Sanity in the first few weeks of meeting someone and they had pulled the classic ‘I’m not ready for a relationship’ line. I knew this person was an emotionally unavailable mess and I went into it anyway – and that’s a theme I wanted to highlight throughout the song. When the rose tinted glasses come on, all sane, rational decisions go out the window.”

After working with Xavier Dunn on “(in)Sanity” Aya was fortunate to be rewarded with a grant from Arts ACT to work on the EP with the team she has previously collaborated with.

“After the songs were all done, I decided to name it ‘What We Look With The Light On’, as I felt it was a good way of encapsulating the songs on the EP. They’re all about relationships, human flaws, really – the human experience, in all its bruised and battered glory. I couldn’t be prouder of my debut EP, and am grateful, humbled and so damn excited to share it with the world,” says Aya. “The concept for the song was centred around deserving someone who loves you with all the lights on, with all your flaws, exactly as you are- but we flipped it on its head and the narrative has become the opposite. You see them without the rose tinted glasses and wonder how you ever saw them differently.”

The second track “Body That I Break” details the tribulations of on again, off again relationships and the emotional toll it can have on both people involved. “Body That I Break” was the first song I wrote with Bri Clark and Jordi White- who ended up co-writing four tracks on the EP,” said Aya.  “I walked into our session that day talking about someone I’d had an on again, off again dynamic with for the last 5 years. The timing was never right, we were never headed in the same direction. I thought it’d be best if I let them be, I was always scared I’d break their heart- hence the lyric “I can’t let you be the body that I break.”

“Breakups tend to make us question who we are, who we were in that relationship and what we can learn for next time. I walked into my session with Bri and Jordi coming off the tail end of a breakup, where my sense of self had taken a beating,” said Aya. “What is now the chorus, was originally said as a joke! But when we tried it, it felt sassy in all the right ways. ‘Smart Girls’ is about that reflection on a relationship, and knowing that at the end of the day – you did all you could, you’re a badass, but the relationship wasn’t right for you.”

Both “(in)Sanity” and “Smart Girls” were added to rotation on triple j Unearthed. Since then, Aya Yves has continued to prove her prominent status within the pop space and display her undeniable ability to tell stories through her angelic vocal tones and powerful songwriting abilities.

In late 2020, Aya released the gorgeously layered pop ballad “Dear E.” which showcased Aya’s pitch-perfect vocal abilities. “Dear E.” also features production credits from Xavier Dunn, and was mixed by Chris Collins. To kick off 2021, Aya released her fourth single from the EP, “Brave,” a stunning pop ballad. The track asks us to face difficult moments with courage and begin moving through life unafraid. Since it’s release, the track has been added to playlists Chill AF, The Office Stereo and Low Weekend.

Aya Yves is the brainchild of a Cooma born Vendulka. Born from a love of pushing boundaries and breaking expectations, Aya contrasts light airy vocals with dark, brooding and quirky production. The Aya Yves project has been taken far from Vendulka’s folk music roots, however, still manages to keep the vulnerability and unifying connection that folk music is known for.

Standing out with her otherworldly vocal abilities and honest approach to songwriting, Aya Yves is quickly becoming one of the premier emerging faces in Australian pop.

“What We Look Like With the Light On” EP is available
to stream on all platforms now. 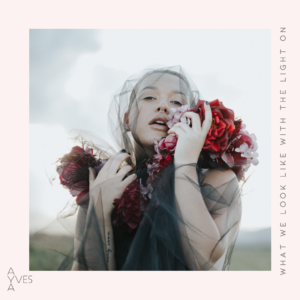