Vast storyteller, and rocking troubadour Jack Bratt has today announced the release of his ripping new single The Outsider, a song about self-identity and perception [Listen: The Outsider], complemented by an entertaining spaceman-themed video clip [Watch: The Outsider].

A grand, existential exploration of fitting in when feeling like an outcast, The Outsider hits notes of timeless rock that will have fans of Holy Holy and Foo Fighters salivating. Recorded and produced by Joel Myles at Hunting Ground Studios in Brisbane, and mastered by Mat Bartlem (Matt Corby, Jarred James, Boo Seeka), Bratt’s timeless new single is a thoughtful and moving piece; an exciting next step from one of Australia’s favourite newcomers.

Jack Bratt’s emotive vocal strikes a chord from the outset with sharp, moving lyrics that reflect on feelings of isolation widely felt during this worldwide pandemic. “It’s about being left of centre, about not fitting in,” the Brisbane musician says about the song, “it’s about perception. You may have an idea about how others view you, but that’s not necessarily who you are. It’s easy to think somebody might be doing really well, but that could just be a front, while they’re dealing with a lot of problems. I think what I’ve learned from being in lockdown and having conversations with friends, is that nobody is really okay; we all have our own struggles.”

With plans of heading to New York City in June for a three month artist residency (thanks to his recent Grant McLennan Fellowship accolade) momentarily quashed due to the virus, Bratt’s new single speaks to the current halted state of the music industry and the effect it has had on mental health, explaining, “Anxiety is at the core of the song. It’s really about trying to get by, but everybody is carrying around some sort of pain with them. It’s alarming how many people I know especially in the music industry who suffer with anxiety and mental health.”

The video clip for The Outsider brings an extra-terrestrial element into the fold, spaceman cometh! Directed by Bradley Murnane from Spilting Films, the video tells a story of an astronaut who has fallen to Earth and is trying to find his way home, only to find love along the way. “I was just thinking about the most extreme version of somebody who doesn’t fit in and stumbled on the idea of a man who falls from space and is trying to find his way home,” Bratt says of the charming clip, “but in the end, he transitions into a normal life on earth, adding a fun little twist.”

Jack Bratt has begun work on his debut album which is set for release in early 2021, and with new music on the way his fans are champing at the bit to hear more from this exciting rocker. 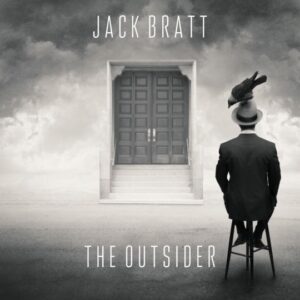 The Outsider is out now!