ATLVS’ fresh new track takes recording, mixing and mastering credits from Alpha Wolf’s Scottie Simpson and explores toxic behaviour from selfish, manipulative people living with a ‘God complex’. The band explain that the new single “speaks on how we are fed up with this behaviour. It’s essentially a call out for those who think they can walk over people.”

“Nazareth” is complimented by an animated music video packed with iridescent imagery directed, produced and edited by Sabian Lynch (Alpha Wolf) of 104 Creative with additional 3D elements by Dissident Media.

ATLVS is Nathan Coff (vocalist), Matthew Borthwick (bass/vocals), Nick Clavarino(drummer), Nick Fitzgerald (guitarist) and Steve Ljiljak (guitarist). Since the bands inception, ATLVS have built a loyal following, touring Australia for the first time at the end of 2019, showcasing their brutal sound and winning over the hearts of metal fans across the country. The end of tour brought with it the quintets first headline show, which completely sold out.

Outside of headliners, ATLVS have jumped up to support shows with the likes of Windwaker, Gravemind, Pridelands, Ocean Sleeper and more and have been labelled as “Completely Ruthless” on their triple j Unearthed page. Hysteria Mag previously weighed in to affirm ATLVS are on a steady route to “take the Australian music scene by storm” while Wall Of Sound coined them “a healthy dose of heavy“. 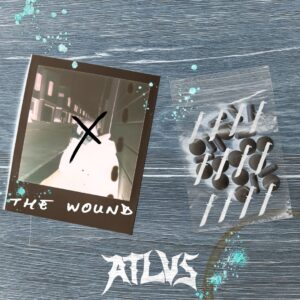 ATLVS released their debut EP, ‘Memoir’ in 2019 which saw collaboration with Ocean Sleeper’s Ionei Heckenberg on “Insinuate” and Lotus Eater’s Jamie McLees on “Mercury“, skyrocketing Spotify streams to over 200,000 collectively.

Nazareth is a new chapter for ATLVS, and the five-piece have plenty more in the tank. “Nazareth” is out now, streaming everywhere.