‘DESPITE ALL ODDS’ & DROP

The new generation of Brisbane Metalcore is among us! Among The Ruined are today announcing the release details of their forthcoming Album ‘Despite All Odds’ – and dropping the single and video of the same name! The Album will be released into the world on Friday June 26, with pre-orders going live this Friday May 8th, along with the first single being available to stream and purchase same day at http://ffm.to/ATR_despiteallodds.

Formed in 2015 by Patrick ‘Paddy’ Creamer, Bailey Mackelden and Caleb ‘CJ’ Jones, Among The Ruined blend heavy breakdowns of the Metalcore genre with a Melodic Metal sound, reminiscent of bands like A Day To Remember, I Prevail and Motionless in White. They have taken the stage alongside bands such as Deadlights, Earth Caller and Awaken I Am.

Vocalist Paddy Creamer says that new single ‘Despite All Odds’ is “…about staying focused and dedicated to achieving goals of success without letting life get in the way. To push through all barriers and set backs – and explores further into that same mindset, of being more afraid of giving up what might have been then giving it everything and never getting there.” The clip for the new single wascreated by Colin Jeffs and Daniel Ramsay at Ten Of Swords.

Now they prepare to release their debut record, ‘Despite All Odds’, into the world, set for release Friday June 26 2020. Over the course of a year, ATR did all the tracking and editing of the new EP themselves and worked with Cory Judd (A Night In Texas) on mixing and mastering. The artwork was created by Soft Surrogate (who has worked with the likes of Memphis May Fire, Of Mice And Men, Mayday Parade and more).

Watch ‘Despite All Odds’

‘Despite All Odds’ is the phrase that sums up the main concept of the album – the Album cover is a visual metaphor. Creamer explained that it represents “…a man faced with a seemingly impossible task of finding his way through a maze to get to warmth before he freezes to death by the incoming frost. It is up to him as to whether he chooses to will himself through the maze, die trying instead or just accept defeat without even trying.” Tracks on the record explore other personal, societal, political and social content.

Among The Ruined’s album ‘Despite All Odds’ will be released into the world on Friday June 26 and pre-orders will be open this Friday May 8 at http://ffm.to/ATR_despiteallodds, along with the title track of the record for streaming/purchase. 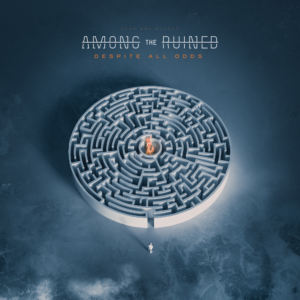