The Motion Below are back to finish what they started with “Truth Hurts”, part two of their mini music series that encapsulates the inner turmoil of a man lost within himself and ultimate descent into madness.

“Truth Hurts” premiered on triple j’s Short. Fast. Loud on Wednesday and made its video debut at TheMusic yesterday! The track was produced, mixed and mastered at The Loud Noise Estate(Polaris, BLKLST, Dealer) and demonstrates the contrasting soaring vocals and fearsome raw vocals that have earned the band praise from triple j staff on their Unearthed page. The track meanders its way through angry verses to quiet interludes that narrate the dark thoughts of the protagonist. “Truth Hurts” is part 2 of 2, following the release of the previous single “Dead Ends”. The new track carries the same themes as the last, exploring the cycles of addiction and paranoia but with far heavier instrumentation to encapsulate the feeling of a descent into madness.

Part one of the video duo, “Dead Ends”, quickly scored airplay on triple j‘s short.fast.loud as well as Unearthed’s TOPS, with numerous positive reviews to boot and an add to Spotify editorial playlist Homegrown + Heavy.

Martin Wood Imagery directed and produced both music videos that narrate the story of the protagonist struggling to free himself from the chains of addiction, wondering how he found himself sinking into a bleak existence and ultimately resigning himself to his fate and slipping into madness. 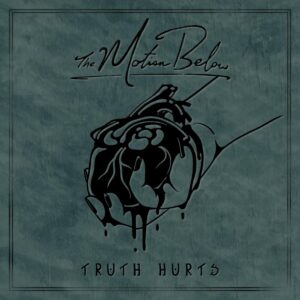 In 2018, Melbourne’s The Motion Below stepped into the studio with the aim of creating something unique, and in turn brought their EP ‘Cronus Complex’ to the table – a significant step in the right direction for the boys with a more refined take on the modern day post-hardcore style. “State Of Decay” was the first to be welcomed into the world last year and was immediately added to Australia’s own Homegrown + Heavy Spotify playlist, Apple Music‘s The Riff and Fresh Blood,built the foundation of interest with solid reviews from triple j and received media love nationwide.

“Figureheads” followed suit and came as the second cut from ‘Cronus Complex’, premiering on The Racket with adds to a couple more Apple Music playlists and another immediate add to Homegrown + Heavy, climbing the ranks until they held the cover image for a couple of weeks and now comfortably sits at over 110,000 streams. The Motion Below are excited to share their brand new single and the conclusion to their mini series.

“Truth Hurts” and “Dead Ends” are now available to stream and purchase at all good online outlets and streaming platforms!