‘THE LINE’ DEBUT ALBUM YOUR

“Crafting elegant pop songs full of self-interrogation”
Rolling Stone
“Westerman’s songwriting takes in the tumult of a whirring mind and turns it into music that has the power to soothe modern anxieties, if not solve them”
Pitchfork

“Manages to delicately balance melodic complexity and a variety of different instruments in a way that sounds not just easy, but effortless”
DAZED

Westerman shares a new song from his forthcoming debut album Your Hero Is Not Dead, out June 5th 2020 via Play It Again Sam. ‘The Line’ is gentle and complex all at once as Westermaneloquently grapples with societal confines over a shapeshifting electronic backdrop. The song is the fifth offering from the album following ‘Your Hero Is Not Dead‘, ‘Waiting on Design‘, ‘Think I’ll Stay‘ and ‘Blue Comanche‘. Listen HERE.

Westerman shares about writing the track, “I was thinking about moral relativism when I wrote this. The ever-shifting parameters of what is and isn’t acceptable. This applies to many things – gender, human rights, parenting, politics. I don’t believe that this means there’s no right and wrong, but normative values are constantly in flux – hopefully as we continue to be more compassionate.”

Your Hero Is Not Dead is the follow-up to his critically-acclaimed Ark EP. Recorded alongside his close friend and producer Nathan Jenkins (A.K.A. Bullion) at first in Southern Portugal before finishing the process in London, Your Hero Is Not Dead is an album about empathy and compassion, struggle and release, and all the ways we contradict and battle within ourselves. The project is full of supremely crafted, groove-hinged songs about moral, political, and ethical grey areas, that find Westerman attempting to resolve external issues by looking inward.

‘The Line’ by Westerman is out now, buy/stream it here. 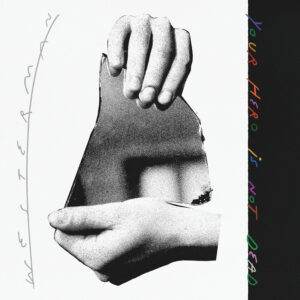