on ‘Spilled My Coffee’ ft. Rxseboy and

Amassing over one million streams across platforms and backed by heavyweight tastemakers including Zane Lowe, Annie Mac and Jack Saunders, ‘Spilled My Coffee‘ has already reached cult status, with Allday‘s added feature now tipping it into a whole new stratosphere. Contrasting the deep, bluesy vocals from Jack Cullen with the dynamic raps of Rxseboy and Allday, the melodic hooks float over a dusty acoustic guitar riff and a bed of hypnotic, low-slung grooves whose snug, intimate appeal has proved one of the most viral of 2021 so far.

Snøw‘s relentless innovation in crafting slyly addictive lo-fi gems has garnered him a growing fan base across international audiences, recently featuring on Kina‘s Platinum-certified record Get You To The Moon. The precocious songwriter continues to establish himself as an artist crafting trailblazing hits with each perfectly executed release. Introducing Allday to the mix is yet another example of his shrewd and carefully considered execution, linking the Australian star up with British crooner Cullen and Powfu collaborator Rxseboy to create a formidable triple threat, each artist bringing their own distinctive flavour to Snøw‘s bedroom pop eden, the range of the collaborative effort never overshadowing ‘Spilled My Coffee‘s core cozy appeal.

Over four studio full-lengths and countless collaborations to date, Allday has carved out a space completely of his own within the Australian hip hop landscape, recognised for his dreamy, nostalgic aesthetics and his artistic versatility, honing an unmatched blend of indie and hip hop influences and an ability to switch seamlessly between soft, ruminative vocals and rap flows, most recently deployed on his Drinking With My Smoking Friends LP, which won swift praise from the likes of Rolling Stone, Clash, NME and was named triple j’s Feature Album. With Allday in tow, Snøw now adds the final piece to his ‘Spilled My Coffee‘ puzzle, keeping the heat high on his unassuming anthem, which, continuing to reach new audiences and constantly finding new life within itself, feels like it’s rapidly approaching a tipping point. 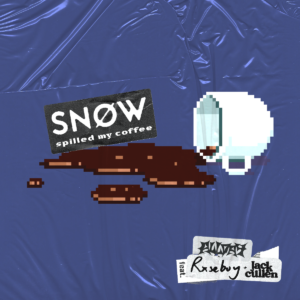