Watch the video for ‘Good Girls’

“The opening line (killing your idols is a chore) was something I wrote after listening to some friends arguing about the present day implications of loving certain problematic male artists – I was struck by the lengths that people would go to in order to excuse their heroes and how that was so juxtaposed to my own experiences in the world. Women have to constantly justify their right to exist and negotiate for their own space. We’re told that bad things don’t happen to Good Girls. That if you curate yourself to fit the ideal – keep yourself small and safe and acceptable – you will be alright, and it’s just not f**king true.”

The video for ‘Good Girls’ is the final in a lo-fi, nostalgic, and analogue-inspired trilogy directed by multi-disciplinary artist Scott Kiernan, following previous singles ‘He Said She Said’ and ‘How Not To Drown’. On the making of the trilogy of videos, director Scott Kiernan says: “The video for ‘He Said She Said’ dealt with doubt in making of one’s own image while under the manipulation of another; while ‘How Not to Drown’ sought an exit from a low, from feeling penned in by larger power structures, and refusing to succumb to them again. But ‘Good Girls’ portrays a certain learned confidence in knowing who and what you are, despite what others might conform to themselves. It’s having a clear vision, or something like a compound eye that can see at all angles. So, like ‘How Not to Drown’ before it, ‘Good Girls’ continues down from a scene in the first video and steers it to a new parallel conclusion. Near the end, we find Lauren spiralling on the studio floor, surrounded by the crew and ghosts of the previous videos, as the entire image cycle finally comes to a halt.”

‘Good Girls’ follows on from previous single ‘How Not To Drown’ featuring one of the band’s musical heroes, The Cure frontman Robert Smith. ‘How Not To Drown’ was released in June alongside the announcement of Screen Violence, and premiered via Zane Lowe. The accompanying official video featured both CHVRCHES and Robert Smith, with its claustrophobic, film-noir imagery a continuation of the aesthetic presented with the album’s debut single ‘He Said She Said’. Following its release, Robert Smith also remixed the single, telling The FADER he wanted his version of the single to “conjure up an irresistible midnight sea with dark mesmeric currents”.

Screen Violence was recorded almost entirely remotely between Los Angeles and Glasgow, members Lauren Mayberry, Martin Doherty and Iain Cook self-produced and mixed the album via video calls and audio sharing programs to create something that is unique and special, but inherently CHVRCHES. The album will be released August 27 2021 – pre-order is available HERE.

Next weekend, CHVRCHES will perform as a part of Splendour XR. Tickets are available for the online festival HERE. 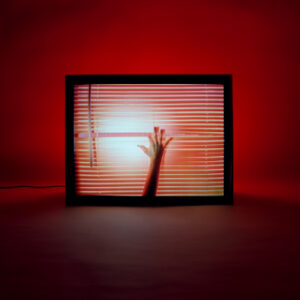