Now on home soil after a whirlwind few months of touring, Sydney pop-punk favourites Yours Truly are lifting the lid on a music video for their track ‘Afterglow’ featuring footage from their time on the road (watch HERE). After dropping in April, the Afterglow EP is now tipping 5 million streams and continues to see Yours Truly collect  global attention and accolades.

In June the band spent time in the UK taking to Download Festival and supporting the likes of Sum 41 and State Champs on their respective headliners, before stopping home briefly for a run of Australian headline dates. They then head to the US to play Riot Fest (featuring none other than Blink-182, Slayer, The Raconteurs, Rise Against + more) and to support Senses Fail across the country.

Yours Truly will round out the year playing Good Things alongside Parkway Drive, A Day To Remember, Violent Soho, Simple Plan and more before bunkering down to write new music.

“‘Afterglow’ is one of my favourite songs off the EP. We love playing this song live so it was fitting to put out a video full of footage from our first time in the UK and our very first Australian tour,” shares Yours Truly vocalist Mikaila Delgado on the video

“We really wanted to capture the energy and excitement this year has brought us on and off the stage and hope you feel a bit of that too!”

Searingly honest and utterly infectious, Afterglow garnered massive nods from outlets including Kerrang! (4/5), Wall Of Sound (“Yours Truly are fast becoming one of Australia’s best new exports) and Depth Magazine, who awarded the release a whopping 10/10. As well as enjoying continued support from global radio including Triple J, BBCR1 and Idobi Radio across its singles. 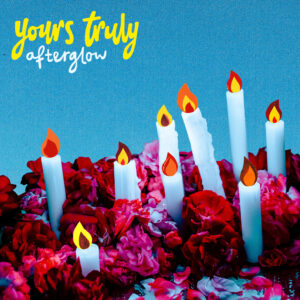