Local Natives have released a new song “Nova.” The dreamlike track is taken from the recording sessions of the band’s latest album Violet Street, produced by Shawn Everett and the song was originally edited to sync up with two unexpected visuals: Interstellar and Playboi Carti’s music video for “Location.”

The band says of the song, “We recorded ‘Nova’ while making Violet Street with every intention of putting it on the album. At the very last moment we took it off, but are happy to set it free now. It’s about the haze that surrounds you when you first fall in love, the all consuming fantasy of it. The recording was a prime example of the wild processes we undertook with our producer Shawn Everett. Like a mad scientist, Shawn spliced together moments of us jamming live as a full band inside his warehouse and the sound of smashing beer bottles into a trashcan. We edited all of it to sync up with the scene in Interstellar where Matthew McConaughey goes inside a black hole. With that scene being too long, we ultimately edited it to sync up with Playboi Carti’s music video for “Location.”

Earlier this year, Local Natives released their critically acclaimed fourth album, Violet Street via Loma Vista. The soaring, blissful and introspective new album features singles including “lush and searching” (Stereogum) “When Am I Gonna Lose You,” whose cinematic video starred Kate Mara and was performed by the band on Ellen; “Café Amarillo,” which FADER hailed for “illustrating a sort of emotional purgatory;” and “Tap Dancer” that Brooklyn Vegan praised for its “elegiac ache.” The band wrapped their sold out cross country North American tour earlier this fall with Austin American Statesman praising their “unadulterated energy” at one recent show.

Watch their performance of “When Am I Gonna Lose You” on Ellen:
https://found.ee/LN_Ellen 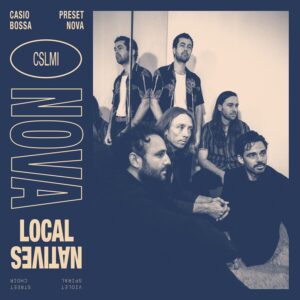 Emotional” – Rolling Stone
“Shimmering” – Stereogum
“Writing some of the finest songs, brimming with emotion” – Line of Best Fit
“Artistic” – Billboard
“Lush…expansive” – Consequence of Sound
“Buoyant …their breezy and open sound is more energetic than ever” – Exclaim.CA
“Amazing” – Under the Radar
“Few bands do romance, and the yearning for it, better than Local Natives” – Buzzbands.LA