Coming nearly five years after the success of their much-loved debut album VHS, this latest LP demonstrates a band at the peak of their powers – something that audiences on this side of the world will behold for the first time as the band play their debut Antipodean shows in February 2020.

Formed by brothers Sam and Casey Harris in 2009, X Ambassadors have proved a durable and exciting force in American music over the last decade.

They’ve seen three of their tunes hit the US top 20 through high-profile placements in commercials (‘Renegades’, which featured in the 2015 Jeep Renegade campaign), films (2016’s ‘Sucker for Pain’ from Suicide Squad) and trailers (‘Unsteady’ from the 2016 drama Me Before You).

Sam has also proven to be something of a gun for hire as a songwriter, working recently as the co-writer on seven tracks from For the Throne: Music Inspired by the HBO Series Game of Thrones, as well as spending time in the studio with red-hot force of nature Lizzo.

It comes as no surprise then, that X Ambassadors’ tracks are typically perfectly constructed pieces of emotional dynamite. Singles such as ‘Jungle’, ‘Unsteady’ and this years’ ‘Boom’ utilise the full force of Sam’s vocal talents while leaning heavily on the keyboard mastery of his brother Casey.

In fact, one of the most affecting moments of an X Ambassadors live show arrives when Casey (blind from birth) takes centre stage and delivers an emotive solo interlude. A stark contrast to the often crunching beats usually delivered by the three-piece, it goes a long way to demonstrating the versatile nature of their music.

“You work for the fans. That’s it,” Harris has said. “Obviously the music has to come from a personal place, but at the end of the day, these fans are the ones that are doing everything for you.”

For the first time in February 2020 at these huge shows, fans from Australia and New Zealand will be given the opportunity to watch on as X Ambassadors deliver a high energy experience filled with soaring vocals and perfectly structured instrumentation. 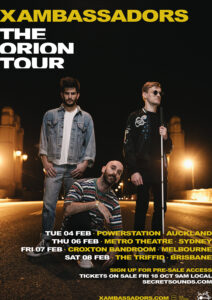