I OH YOU, Illusive Presents and Frontier Touring are excited to announce the return of New York City rapper Patrick ‘Wiki’ Morales to Australia for the first time in two years this February. Wiki will tour in celebration of his latest album OOFIE, described by Pitchfork as ‘tight, diaristic raps and vignettes and grimy production’. Since departing XL Recordings,OOFIE marks Wiki’s first album with his own label, Wikset Enterprise in partnership with The Orchard.

Two years on since his last international tour and sold-out stint in Australia, Wiki will take to three headline performances at The Tote in Melbourne on Wednesday 26 February,Black Bear Lodge in Brisbane on Thursday 27 February and at Sydney’s Factory Floor on Friday 28 February.

‘The NYC rapper, having left his label, shakes off the pressure of his tumultuous last few years with a set of straight-ahead, grimy rap songs.’ – Pitchfork

‘The album takes Wiki, the protagonist of his own adventure, to rock bottom, and then hedges with hints of future triumph’  – The New Yorker

‘There’s an art to making personal, insular rap music without shutting the rest of the world out… Wiki walks it expertly.’ – Stereogum

‘The New York City rapper’s furious and filthy bars, backed by a beat from Madlib, may be enough to offset any potential nausea.’ – The FADER

‘OOFIE marks a striking return to the soundscape of New York for the rapper that still calls the city home.’  – Wonderland Magazine

OOFIE is Morales’ third solo album since his work with Ratking, following Lil Me and No Mountains In Manhattan. Released in November 2019, OOFIE, which was preceded by the single, ‘Eggs’, his collaboration with the legend, Madlib, showcases Wiki’s dexterity and skill as one of NYC’s greatest wordsmiths and curators, featuring collaborations with Lil Ugly Mane, Denzel Curry, Your Old Droog, Lansky Jones, Princess Nokia and duendita, including the singles ‘Grim (feat. Lil Ugly Mane & Denzel Curry)’ and ‘Pesto’. 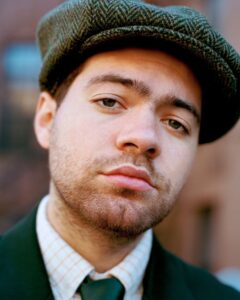