As Weatherstate approach the release of their second album ‘Never Better’, which will be out Friday, 11 February via Rude Records, the Weymouth punk band have revealed another new track called ‘Headstone’.

Showcasing a slower, more contemplative side to Weatherstate, building to that anthemic, singalong chorus complete with their signature riffage, the song theme centralises around fulfilling your potential.

“’Headstone’ is about trying to make something out of ourselves in the time we have here,” says guitarist Callan Milward. “It’s okay to go through periods of life unhappy and that’s what makes the good bits all the better. The lyric ‘Catch me, I don’t want to come down,’ specifically relates to friends being around when you need a safety net and how important it is to have a support network that can get you through those monotonous times. We’re only around for so long, and that’s the way it is, we shouldn’t beat ourselves up too much, and it’s completely okay to sometimes just roll with the punches.”

‘Never Better’ is the follow-up record to 2019’s ‘Born A Cynic’; a timely commentary, stemming from a place of monotony, helplessness, and apathy to the state of the world around us. Vocalist and guitarist Harry Hoskins comments: “The record reaches out to different feelings that many of us have experienced over the last few years, from a state of mind that is pessimistic when faced with the question ‘will things ever improve?’ Sometimes you have to buckle up and move forward to keep yourself sane.”

Weatherstate’s recent singles ‘Panic Attack’, ‘Never Getting Better’, ‘Current Dose’ and ‘Hangar’ will all feature on ‘Never Better’. The album was moulded by COVID-induced remote sessions collaborating with Four Year Strong’s Alan Day and Neil Kennedy at The Ranch. “All I can say is that you can work miracles over Zoom these days,” says Milward about the process.

2020 saw Weatherstate return to live music with aplomb at Slam Dunk Festival where the band found themselves performing directly before special surprise guests McFly. The band will launch their new material live in the coming months, with a performance scheduled at Teddy RocksFestival in April 2022. 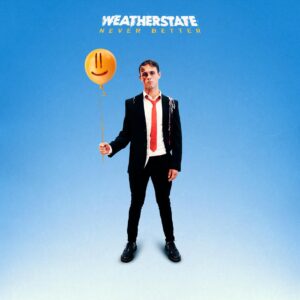