Voodoo Bloo have released two new singles, ‘We’re Here, Love Is Somewhere Else’ and‘Default’ – both from their upcoming so

Lead single ‘We’re Here, Love Is Somewhere Else’ is a dreamy uplifting rock track, speaking to how much space paranoia and social pressures take up in the mind’s hard drive; and a simple reminder that no matter how far in a rut you’re stuck, you’re only a few progressive footsteps away from getting better.

“We only managed to record an acoustic version of it, and the riff fit so perfectly with ‘We’re Here, Love Is Somewhere Else’ that I just had to repurpose it for the song.”

Alongside the single, the band have a “dreamy, trippy” video made by Rory and Voodoo Bloo’s manager, Tony McDonald.

“The trippy approach we have, I think it really helps people sink into the blissful hopelessness I’m trying to portray in the lyrics, it really shines through when I’m watching it at least,” says Rory.

‘Default’ is also released today and is the “b-side” for the ‘We’re Here, Love Is Somewhere Else’ release.

“This is about a one-shot attempt to make good friends with the person I created, to make amends with who I’ve been and what I’ve done. In some ways it worked, but it also allowed me to fully look at some areas of the person I was becoming and set boundaries as to what lines I couldn’t cross anymore,” says Rory of ‘Default’.

“It was one of the first songs written for the album and it was the first of many letters I wrote to myself about how much I’d fallen out of love with who I am, but that there was a light at the end of the tunnel in the form of self-improvement.”

Both tracks were recorded at Massey University. The studio there was designed by the same people that revamped Abbey Road Studios in London.

With today’s singles offering a taste of what’s to come, THE BLESSED GHOST album is set to delve deeply into and explore the range of the band’s music repertoire, with each track showing a different side to the band.

“These tracks mark a turning point for one of the biggest strengths of this album, most of the singles on our first album felt really samey to me, but this time around I don’t think anyone really knows what to expect of us, which is something I love dearly,” says Rory. 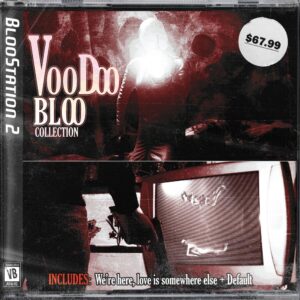 The boys from New Zealand are also partnering with Sydney legends RADICALS to form a two-prong AU/NZ tour across August, through September and up to the 1st October. The tour takes in Central Coast, 2 dates in Sydney & Wollongong on the Aussie side of the ditch and then heads over the pond to New Zealand to take in Wellington, Dunedin and Christchurch.

‘We’re Here, Love Is Somewhere Else’ and ‘Default’ join the previously released singles ‘Small’and ‘Skin’; and all will feature on Voodoo Bloo’s second album THE BLESSED GHOST – set for release July 15! 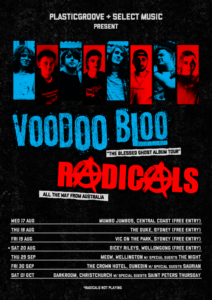