Today it is with great pleasure that I OH YOU present you with Violent Soho’s fifth studio album, Everything Is A-OK, share new single ‘Canada’

Recorded by Australian producer Greg Wales (You Am I, Sandpit, Youth Group), Everything Is A-OK is a headlong cannonball-ride into the darkness of suburban abandonment and decay. Lead single ‘Vacation Forever’ sets a tone for an album that roars and yowls, full of lessons learned and emotions scalded. It also contains some of Luke Boerdam’s (Guitar/Vocals) finest lines “There’s a baby boomer across the street / And it won’t stop staring at me” and “I don’t wanna be sold for free, all the states and their lies, can I just get by”. While the air-punching crunch of ‘Pick It Up Again’, and the video which featured the band door knocking and selling records in their local suburb of Mansfield 4122, is destined to be a suburban anthem.

Dripping in their trademark punk rock style, ‘Canada’ (released today) is reflective and humble, while soaked in Boerdam’s quick witted iconic drawl. He recalls how the riff evoked a desire to escape to Canada, away from the doom and gloom scenarios he was witnessing in his every day. “I guess the main guitar riff just got me reminiscing of a holiday – and all the times we toured through Canada, and it being some sort of last remaining outpost – It’s always been like home but at the opposite end of the world.” From the raw alt-rock energy of Boerdam‘s vocals to the masterfully conducted relationship between the melodic and rhythmic guitar components, the result is a classic Violent Soho track, packed full of frustration, irony and wit.

After stirring triple j listeners this week as the feature album, Violent Soho celebrate the release of their colossal new LP by reaching out to fans in as many ways as they can in these unusual times. For a band who live and breathe one-on-one contact with their fans, and with instore signings and live shows unable to go ahead, Violent Soho will instead bring their record to the people, with a live online listening party.

In a time when things don’t feel so A-OK, last week tear flyers started appearing nationally on phone poles, with a mysterious phone number and a simple message, ‘Everything Is A-OK’. On the other end of the phone line was a sampler of the new album, a chance to bring some excitement and anticipation ahead of the full album release today.

This excitement has been building since late last year, after the band dropped two new tracks ‘A-OK’ and ‘Vacation Forever’. Then in early Feb fans started seeing gig posters pop up in cities down the east coast, and within a few days, it’d been confirmed that Violent Soho would be playing 3 very intimate shows in those locations. Wanting to evoke the same anticipation and excitement they’d felt as youngsters lining up at their local record store to buy a ticket to see their favourite band, Violent Soho made it so that the only way to get a ticket to these shows was to line up and purchase a hard copy. Each show sold out in under two hours after lines of ravenous fans queued up at record stores in each city. Little did they know, fans were also about to walk into the announce of Soho’s highly anticipated new record Everything Is A-OK, which was available to pre-order on an exclusive blue vinyl colorway, in store on the day.

There’s no question that this band remains one of the most in-demand live acts in the country, and these shows were a sweaty, electrifying reminder of what this band brings to a room. And this was only the beginning. Australia’s love for Violent Soho, was strongly reasserted recently by the public when their now platinum accredited single ‘Covered In Chrome’ came in at a whopping #4 in the triple j Hottest 100 of the Decade.

After playing the part of ‘those kids who don’t seem to fit in anywhere’ with their first two records (2008’s We Don’t Belong Here & 2010’s self-titled), Violent Soho finally came crashing into the public consciousness with 2013’s Hungry Ghost. It came in a hail of riffs and ‘HELL F*CK YEAH’s scrawled on arms, desks, and bathroom walls the world over. 2016 brought the band’s fourth LP WACO, earning  the band a #1 ARIA chart debut, two ARIA Awards, an ARIA gold certification, an AIR Award, and numerous festival headline slots and sold-out tours.

Now, with Everything Is A-OK, the band have drawn a metaphorical line in the sand. It is a declaration that THIS is who Violent Soho are – as a band, as musicians, and as mates. They are still four blokes from Queensland who just want to shred some riffs, play some shows and make the music they love. Their music. And this is them at their best. Five albums into their career, each crammed full of wry suspicion, ageing angst, flippant cheek, existential despair, plaintive hope, pie-eyed wonder and worry — along with metric tonnes of neck-snapping riffs — in 2020 Everything Is A-OK for Violent Soho.

Buy / Stream the album online or buy it physically through www.violentsoho.com or your favourite record store & have it delivered to your door. Stay home. Stay safe. Everything will be A-OK. 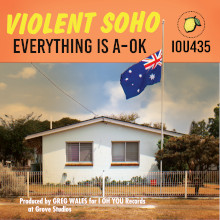 EVERYTHING IS A-OK, AVAILABLE VIA THE BELOW INDIE STORES FOR HOME DELIVERY OR PICKUP (PLEASE CHECK WITH YOUR LOCAL STORE FOR OPTIONS):