Stockholm, Sweden post-punk band V**gra Boys have released their Common Sense EP, their first music to be released since the highly lauded debut LP Street Worms. Beginning with a noticeable and significant level up in the band’s musical evolution, the title track is a glimpse of things to come from the band later this year. It then dives into three more tracks of unclassifiable post-punk, convulsing homegrown grooves and guilt-ridden crooning. Watch the video for the title track, a never-before-seen glimpse into the boardroom of Shrimptech Enterprises, up top.

Serving as a looking glass pointed at the absurdism of existence and misconceptions of modern society V**gra Boys is an unapologetically raw sextet comprised of classically trained jazz musicians, karaoke loving tattoo artists, and seasoned hardcore scene veterans. Equal parts Iggy Pop and Hank Williams, singer and frontman Sebastian Murphy embodies all that which Viagra Boys are ultimately about; a fractured, perhaps disillusioned act, taped up and held together by inextinguishable bravado, explosive appearances, and resourceful songwriting.

With over 180 feverish live shows to support of Street Worms under their belt, several Swedish Grammy nominations, an Impala Award for ‘European Independent Album Of The Year’ and a spot atCoachella Festival 2020 in the bag, V**gra Boys are ready to unveil the next chapter.

Common Sense EP is out now, buy/stream it here. 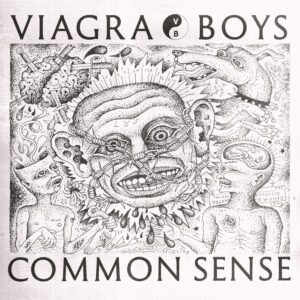