‘ARE WE HAVING ANY FUN YET’

The first teaser from their upcoming new body of work, “Are We…?”, this synth-infused pop-rock track emerges as a hugely bold and exciting statement of intent, boasting production and mixing credits from Dan Nigro (Conan Gray, Sky Ferreira) and Andrew Dawson (Kanye West, Childish Gambino) respectively.

Watch ‘Are Wev Having Any Fun Yet’ below:

The scale of the track, with its anthemic, thudding bassline and hyper-personal lyricism from frontman Josh Noble, is an electric, charismatic, and ambitious move that will be sure to continue the intrigue and attention around them. With epic, cinematic visuals shot by award-winning Manchester duo GRANDMAS, it’s another marker of Larkins’ creative ambitions.

Now named in the NME ‘100 for 2020’ at the start of the year, Larkins are already drawing critical attention from tastemakers incl. THE LINE OF BEST FIT and DORK, BBC R1 (Jack Saunders),Beats 1 (Zane Lowe) and Radio X.

Originally from Glossop in Derbyshire before moving to Manchester, the band have forged a reputation for climate change awareness, gender equality and ethical practices in the music industry.

An exciting reputation is already being formed: Larkins’ arena-scale blend of anthemic, synth-laden alt-pop reverberates with a growing number of fans with each subsequent release. The band have accumulated millions of streams, with their two offerings for 2019, the “TV Dream” EP and single “Not Enough Love” amassing 5 million alone. 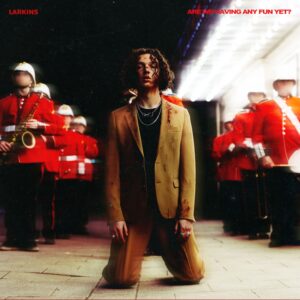 To measure Larkins’ success, get real. Forget the 28.6K Instagram followers and the millions of SoundCloud streams, and “​start back in the tiny town of Glossop counting the distance we’ve covered from there to where we are now​”, says frontman Josh Noble, laughing.

One of the most exciting arena bands to have emerged from Manchester in decades, the anthem-packing four-piece nearly blew the roof off the The Albert Hall in Manchester last year (“beautiful room, that”, says Noble). They’re on the verge of becoming the first act to sell-out the Manchester Academy without having released a full album, and have already racked up over five million streams for their two 2019 offerings, the EP ‘TV Dream’ and ‘Not Enough Love’

Brace yourselves; they’re just getting started, leading the raw, youthful wave of small town bands sweeping out of British suburbia. Josh Noble, 24, and Dom Want, 23, met at Longendale High school in Glossop (population, 33,000; notable fellow survivors, Vivienne Westwood) aged 11 and 12, later bolstering their sound with bassist Henry Beach – “who is one of the most gifted bassists on the planet, even if he can’t make toast”, says Noble – and drummer Joe Gaskell, both21. About time, too. While solo acts dominate line-ups of this year’s triple-A festivals – look to Glastonbury – Larkins are a (welcome) guarantee that the band is back. “You can look to groups like The 1975 as paving the way for bands”, says Noble, “but we use them as the benchmark to beat.” 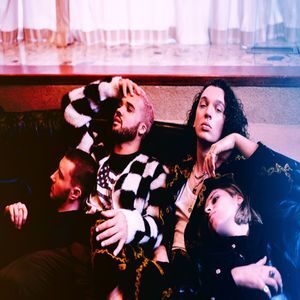 Emancipation is the order of the day. Take pop bop Not Enough Love (“what would your parentssay/ if they knew they were wrong”), an anthem for refuse-to-be-doomed youth wanting to throwoff the adult yolk across the nation. Frankly, it cuts through. “There was never any communitythat we wanted to be part of at home”, says Noble. Boredom ruled. “You just went to school, and came home. We just used to buy booze from the Texaco petrol station, go sit in the skate parkand try to pretend we were dead hard”. Noble and Want named the band after Philip Larkin,spotting a poster of the punk poet on a college English teacher’s wall. “Literally, it’s because he looked like a nutcase, and was on the wall. He’s got a huge comb over, huge glasses, this super 70s punk poet peering down. He’s cool as f***.” Conscientiousness is the new cool. The band have made great strides in eco-friendly touring: their self-designed merchandise line, Animals in Costume, is all ethically sourced. “I love the fact that people go to other bands and say, do you know Larkins is organic and ethically sourced?”, says Noble. “Yes we sound like c***s, but it’sfunny. Change it up. No one wants rubbish that costs you 3p and some kid made in Asia”

Truly, Larkins have done the hard yards. They worked “five nights a week” gigging Manchester’s formative Northern Quarter circuit, pretending that they were aged over 18 in order to sneak into adult-only gigs and playing shows for which they were payed £50 a night (enough to cover a new pedal board) while holding down jobs in Pizza Express; took themselves on a 40-date UK tour. And if turning every venue you play into the most talked-about ticket in town is a priceless knack, Larkins are already bona fide rock alchemists. “We played a little festival in Manchester years ago”, recalls Noble, “and Manchester Evening News put a picture of us there at this tiny little set on the front page next to a picture of Noel and Liam Gallagher, with the headline ‘Manchester’s next arena act’. I thought yes, this could work.”

To label them Oasis-a-like is to scrimp on the full picture though. Yes, there’s the same deceptively vulnerable lyricism that made Noel Gallagher an industry titan. “We have a checklistof things we go through when we’re writing songs. Does it have enough bass in it? Because we’ve got a Henry. Does it have a beautiful moment? Because I want to look someone in the crowd full in the eyes and make them feel something.” ‘Make You Better’ and it’s “oh how I miss the summertime, oh how I miss my guiding light” refrain speaks to lost love in the form of a beloved grandfather Noble watched “crumble under Alzheimer’s, dementia and cancer”. Yet while they also cite The Killers “who elevated Indie music”, The Foals (kindred fans of muted guitars and complex ‘math rock’) and even Major Lazer as influences, it’s their fans – often individually – who stick most in their minds. Beach can I.D. about 500 Larkins “superfans” offthe top of his head by both name and Instagram handle. “He smashes Instagram for about five hours a day”, laughs Noble. Noble spends hours a day himself in the endless Instagram private message groups; groups that fans have set up to wish each other good morning and good night, talk about the Larkins shows they’re planning on attending and swap memes based on their favourite bandmates (a GIF of drummer Gaskell flipping pancakes with his sticks is a favourite).“I’ve never seen a band do what we’ve done as a community”, says Noble. “I’ve seen Yungblud and even The 1975 to an extent, but from such an early age we’ve kind of been like, this is the band, this is what we’re about, this is what we quite like to do, and if you’re into it, we can talk.”

And they do talk. “I put out posts on Instagram which are little notes from me which to ask what is the worst gig experience you’ve had as a girl, and promise that we’ll f***ing tell some lads that this is not okay.” Deconstructing toxic masculinity – “whatever masculinity means” – has become an unexpected by product. “I remember reading this story about a girl who had walked home alone and been attacked, and they’d blamed her for what she was wearing, and everyone was like ‘why’d she have to dress like that”. TV Dream ended up featuring the lyric. “That’s what it was like in Glossop. Everyone would say, well, she had her legs out. And you’d be like,this is so sickeningly ridiculous”. There’s a duty of care in their community – safety practices are discussed informatively among fans in their Instagram threads. Gigs should be fun, and safe.“It’s about men demanding more of themselves”, says Noble.

He’s prepared to hold them – including himself – to account. After the rapper Slowthai made leering comments to comedian Katherine Ryan on stage at the NME Awards earlier this year,Noble was one of the first to call him out online. “I was the only musician who Tweeted about the whole Slowthai thing. No one said anything and I said something along the lines of “boys are the worst”. And the amount of kick back I got off lads was unbelievable. Like, ”you can’t f***ing marginalise lads like that, you can’t put them all into the same group, we’re not all like that”.And I was like, that’s not the point – the point was that boys are the worst because boys don’t call other lads out”. Times up. Over to the new romantics.