Liberation Records are proud to announce the return of Melbourne’s Two People with their stunning new single Dream Steppin’, a hypnotic electronic soundscape that marks the first taste of new music since the release of their debut album First Body.

Premiered yesterday via triple j’s Good Nights, Dream Steppin’ is a stunning return for the Melbourne duo and sees vocalist Phoebe Lou and multi-instrumentalist Joseph Clough working with Kllo producer/member Simon Lam to find the perfect balance between floor-filling energy and moody electronica. The band, who are behind all avenues of their creative work, went to the middle of nowhere to film the enigmatic music video (premiered this morning via Flaunt) at a location that was intended to feel of no particular time and place.

According to Joey and Phoebe, Dream Steppin’ is about “the unrelenting haunt of life. We tried to find somewhere both futuristic and historical. That’s what the song is about. Reoccurring dreams that take you somewhere surreal and leave you feeling a little uneasy”

Two People released their debut full-length album First Body in January 2019. It was a collection of intimate and honest electronic songs featuring ‘I’m Tied, To You’, ‘Phone Call’and ‘Fading’. The record saw the band signed to Terrible Records in North America, perform live at SXSW and Splendour in the Grass and score major global support from Spotify and Apple Music.

“A two-part pop partnership, their brooding sound links the darker moments of digital pop exploration to a kind of trip-hop sound”. – Clash Music

“Moments of nocturnal foreboding are balanced with a melodic lightness that lifts the tension”. – RRR (Album of the Week)

“A sensuous and hypnotic sound that is making the pop world take notice.” – Mixmag 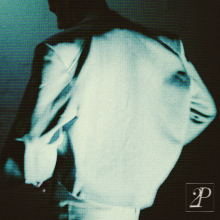 Single out now through
Liberation Records