Rising duo Two Another continue to make inroads into 2020 with the reveal of ‘Stronger‘, their third release of a year that has seen the duo praised by the likes of Complex, Wonderland Magazine and rack up well over one million streams already. Purveyors of shimmering R&B, the past couple of years have been tough ones for the duo as they’ve tackled issues surrounding sexuality, mental health and fatherhood head on. ‘Stronger‘ is how Two Another feel in 2020, and despite the testing times facing society at the moment, the duo look to continue a prolific year. Speaking on the track, Two Another states:

“‘Stronger’, like many of our tracks, was born out of collaboration. We had been working on an idea very different from the final record before Luke Wynter played a bass part – we then rearranged the instrumental around his bass groove, adding a more sparse programmed drum machine beat. Lyrically the song addresses our romanticised expectations of adulthood and that moment you realise no one is there to hold your hand and you need to carve out your own path. No one has all the answers to the questions being asked, it is ok to be vulnerable and to ask for help.” 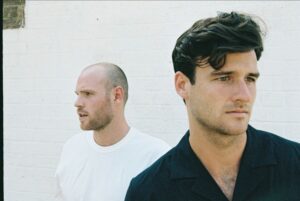 More on Two Another….

The origins of Two Another’s global story lie under the Australian sun. Angus, born in the UK, and Eliot, in the US, connected through the music program run by Bag Raiders at their school in Sydney. They quickly bonded over a mutual love for Ableton and French Touch.

After school the best friends first found themselves in different cities in Australia, then Europe, balancing writing trips and remote collaboration for a number of years before finally coming together in London to form Two Another in 2015. They now split their time between Amsterdam and Stockholm.

This spirit of collaboration not bound by borders is at the core of Two Another. Whilst Angus focuses on the idiosyncratic production and Eliot his emotive vocal and lyrics, many of their tracks feature performances by musicians from different sides of the globe, each adding their individual flavour to create an effortless fusion of soul, alternative R&B and contemporary electronic music.

Two Another’s music is an amalgamation of all their musical memories – inspired by their parent’s love for Motown, growing up during the golden era of indie and later discovering their own love for 90s electronica, dance and hip hop. It is music to make you feel – even on the dance-floor.

Listen to ‘Stronger’ below:

In spite of their commercial success, the still independent duo have remained relatively anonymous. Not out of intention, that’s just how it happened. Their new body of work addresses this head on, giving the listener an insight into their lives both as individuals and best friends as they open up about family, friendship and sexuality. It is their most honest and vulnerable work to date, proving that the foundation of friendship can lift us through the hardest of times to a brighter future.

For more info on Two Another, visit: