FROM ‘SIDEWAYS TO NEW ITALY’ –

Following the album’s widely-lauded first two singles ‘She’s There’ (premiered by Annie Mac on BBC Radio 1) and ‘Cars In Space’ (track of the day on KEXP), melodic earworm ‘Falling Thunder’ continues to find Rolling Blackouts C.F. at the peak of their powers: a swirling, mesmeric pop song that perfectly evokes the timeless nature of Sideways To New Italy – a record that’s universal yet threaded through with personal histories, born of dislocation but with a distinct geographic identity. Tom Russo explains it’s “about pushing on through the relentless march of time, against the constant cycle of seasons. And the way people change and relationships change. It’s set in that time when autumn is turning into winter and the trees are getting bare.”

The accompanying video (premiered overnight via The Fader) was shot by a friend of the band, Jamieson Moore, and is comprised of vacation footage from Sicily, Sardinia and the Aeolian Islands, the ancestral homeland of the Russo Brothers. As Tom elaborates: “Our friend Jamieson Moore shot the footage of Sicily, Sardinia and the Aeolian Islands on her phone while on vacation last year. The Aeolian Islands is also where my and Joe Russo’s ancestors are from. We were also planning to shoot the band playing in Eolian Hall in Melbourne (it’s a community hall founded by Aeolian immigrants). We got some practice footage but by the time it came to shoot the band, we were on lockdown. So it’s turned out as a kind of a love letter to a particular place.”

The eponymous New Italy is a village near New South Wales’s Northern Rivers – the area Tussie is from. A blink-and-you’ll-miss-it pit-stop of a place with fewer than 200 residents, it was founded by Venetian immigrants in the late-1800s and now serves as something of a living monument to Italians’ contribution to Australia, with replica Roman statues dotted like souvenirs on the otherwise rural landscape. The parallel between these remnants of home and the band’s own attempts to maintain connections and create familiarity during their disorienting time on the road were not lost on Russo. “These are the expressions of people trying to find home somewhere alien; trying to create utopia in a turbulent and imperfect world.”

In addition to the specific town, the songs on the record exist variably in Darwin (‘Cameo’), Melbourne (‘Beautiful Steven’), Los Angeles (‘The Cool Change’), the tiny town of Rushworth (‘Not Tonight’) and the driver’s seat of a car at a drive-in movie (‘Cars in Space’). Rolling Blackouts C.F are well-versed in a detailed and cinematic style of songwriting, where landscapes, interactions and memories materialise as characters and stories that reflect the tight, swirling guitars that emote alongside the trio’s voices. 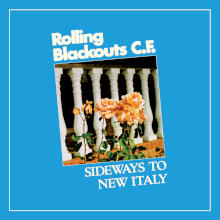 Sideways To New Italy tracklisting:
1. The Second Of The First
2. Falling Thunder
3. She’s There
4. Beautiful Steven
5. The Only One
6. Cars In Space
7. Cameo
8. Not Tonight
9. Sunglasses At The Wedding
10. The Cool Change