+ OFFER PREMIERE TO FANS WHO

STARRED IN THE VIDEO

After calling on their community to help them create a music video for their new single ‘Heavy Weather’, today The Rubens release the final result – an incredibly creative, immersive & kaleidoscopic collection of fan moments in isolation.

After editing together hundreds of entries, the band invited fans who starred in the video to join them for the premiere via an exclusive Zoom yesterday. Following this, all fans were sent the unlisted YouTube link to premiere themselves via socials ahead of today’s official release.

Bursting with colossal hooks that are bound to stay in your head for days, ‘Heavy Weather’ is all about empowerment; an anthem reminding us all to take control of the inner critic and back yourself when times get tough.

‘Heavy Weather’ follows the band’s recent hit, ‘Live In Life’, now certified platinum and with a combined 20 million+ streams & 100,000+ Shazams. The track saw the band retain the #1 position on Spotify’s Hot Hits Australia playlist for four weeks (and grace the cover) as well as top 5 positioning on Apple Music’s Today’s Hits. At radio it was #1 most played on triple j & playlisted across the HIT network.

After postponing their largest headline tour to date due to COVID-19 (originally scheduled from May – July), last month The Rubens announced their rescheduled tour dates, taking place from Sept – Dec & onsale now. The NSW band will play metro cities for the first time since their 2018 LO LA RU album shows, across venues such as Fortitude Music Hall (Bris), Freo.Social (Freo), The Forum (Melb), and The Enmore Theatre (Syd). After having embarked on 3 regional tours in the past 18 months, the band will be revisiting some old regional favourites as well as some towns they’ve never played before, including Bundaberg, Warrnambool, Shepparton and more. The tour, presented by triple j, is in celebration of their summer hit, ‘Live In Life’. 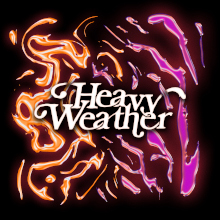 ‘Heavy Weather’ The Rubens
Single out now through Ivy League Records
Available to buy/stream here
The Rubens understand that it’s an extremely tough time for fans. For anyone who has previously bought tickets and wish to know their ticketing options, all ticketing & information can be found at therubensmusic.com.
Follow Rubens below