ANNOUNCE THE RELEASE OF THEIR
MTV UNPLUGGED (LIVE IN MELBOURNE) PERFORMANCE – OUT FRIDAY 10 MAY
+ MILLION MAN GOES GOLD!

Following last night’s broadcast of MTV Unplugged Melbourne on MTV, The Rubens have announced the release of the performance digitally (audio only) and a limited edition CD/DVD bundle. Both formats will be out on Friday 10 May and are available to pre-order now!

Filmed in February in front of a live audience at The Esplanade Hotel – or The Espy as it’s commonly known – in St Kilda, The Rubens were accompanied by a stunning string quartet (Louise May, Amy You, Paul Zabrowarny and Ceridwen Davis)  and harpist (Emily Rosner) as they performed a 14-song set. The stripped-back session included hits such as ‘Hoops’,‘Never Ever’, ‘My Gun’, ‘Lay It Down’ and ‘Million Man’. Soulful pop vocalist Lauren Azar also joined the band on stage for ‘Never Ever’, as well as surprising audiences with a cover of Mark Ronson and Miley Cyrus’ recent duet, ‘Nothing Breaks Like a Heart’.

Lead singer, Sam Margin said of their cover, “It’s such a great song and because we have the added strings section, coupled with our friend Lauren singing with us, there are some very special moments happening”.

He continued about their MTV Unplugged Melbourne performance, “We’re really happy with how it turned out. Strings in our set is a first for us and it definitely got some goosebumps going”.

In further exciting news, ‘Million Man’ – the first single from the band’s current album LO LA RU – has now reached Gold certification status. ‘Million Man’ is the second track from the record to be certified by ARIA, joining their follow-up hit ‘Never Ever (feat. Sarah)’, which is now Platinum.

2019 is already shaping up to be a big year for the band, who have also confirmed a headline North America tour, where they’ll play to fans across LA, San Fran, Portland, Seattle, Vancouver, Toronto and Brooklyn.

Last year proved to be huge for The Rubens with the release of LO LA RU in June and debuting at number 3 on the ARIA charts. The band have undertaken a mammoth headline tour across Australia, New Zealand, the United States and Europe and most recently supported P!NK on her massive 42-date sell out arena tour of Australia and New Zealand. 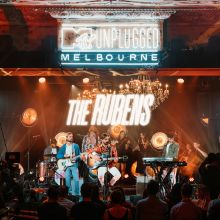