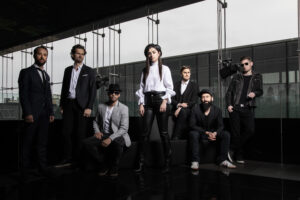 Frontier Touring are thrilled to announce that party icons The Parov Stelar Band will be touching down in Australia in February 2020, spinning their electric mix of jazz, swing, electro and pop in Sydney and Melbourne.

The Austrian group will play two massive headline shows, their very first down under! Starting in Sydney on Sunday 23 February at the Enmore Theatre before heading to Melbourne to play at The Forum on Wednesday 26 February, alongside their performance at the Adelaide Festival.

The Parov Stelar Band was created by Austrian musician, producer and composer Marcus Fuereder alongside his Parov Stelar recording project. With years of experience mixing unorthodox and groundbreaking sounds, Fuereder has become one of Austria’s most renowned international electronic artists.

His most recent album, 2017’s The Burning Spider, is a reinvention of the Stelar sound, blending jazz and blues with his signature electro beats. Not stopping there, 2019 has been another big year for Parov Stelar, with the release of new singles ‘Gringo’ and ‘Snake Charmer’, a collaboration with Sharon Kovacs.

Known as the founder of electro swing, Parov Stelar has produced some massive tunes over the course of dozens of albums and EPs, including Marvin Gaye collaboration ‘Keep On Dancing’, ‘The Sun (feat. Graham Candy)’, and 2010 belter ‘Booty Swing’, all of which have topped charts around the world. Highly decorated for his efforts, he has won eight Amadeus Austrian Music Awards, with multiple Gold and Platinum tracks in his home country. Outside of his own music, Stelar is increasingly sought after for collaborations and remixes, having worked with the likes of Lady Gaga & Tony Bennett, Lana Del Rey, Bryan Ferry, Klingande, Lukas Graham, and more.

The seven-piece Parov Stelar Band has been showing off their flamboyant live instrumentals and the extraordinary vocals of Elena Karafizi as they mimic Big Bands of the swing generation, melding it all with modern day electronics. Overflowing with dance floor allure, the band has performed thousands of shows around the globe, gracing the stages of the world’s biggest festivals like Coachella, Glastonbury, and Lollapalooza and selling out arenas in London, Paris and Berlin, including the iconic Alexandra Palace and back-to-back shows at New York’s Playstation Theatre.

The Parov Stelar Band’s 2020 shows are built on an array of new music, complemented by an all-new stage design, light show and visual backdrop. Don’t miss out on tickets to one of the world’s best parties!