The release of their debut EP caps off an impressive opening half of the year for these 19-year olds who began 2020 having taken their buzz national with their much-talked-about BIGSOUND appearances in late 2019, being named as an act to watch by triple j, Happy Mag and more, before they had even released their debut single, ‘Cheesy Love Song’, which eventually landed in January, followed by ‘Tangerine’ in April.

The strength of their first two singles saw the foursome adorned with praise from DIY Mag, NME Australia, The Line of Best Fit, i-D, RAGE and more, scoring rotation additions across FBi Radio, SYN, 2SER, and others and bestowed with triple j Unearthed’s coveted feature artist slot for the last week of April. Within the space of six months, the four high school friends from Sydney have graduated from jamming in their suburban basement to word-of-mouth must-see-live-act in their hometown to one of the breakthrough Australian acts of the year.

Where their first two singles – one a dreamy, patiently unspooling piece of psychedelia and the other a kaleidoscopic pop blur climaxing in a blistering guitar solo – showed off divergent sides to the band, the previously unreleased ‘The Seaside’ condenses them into the one multi-part experience. Replete with constantly shifting instrumentation, slippery guitar tones, and the dream-logic structure of Brian Wilson’s most adventurous excursions, ‘The Seaside’ takes the adroit musicality of their previous singles and stretches it out to a sprawling, luxuriant, seven-minute journey.

The opening track on EP1, it’s a showcase for the breadth and confidence of The Lazy Eyes, a moment of loosening that collects all the pyrotechnics they’ve crammed into the ‘Cheesy Love Song’ and ‘Tangerine’ and allows them room to breathe.

Of the track, the band remark that: “The Seaside is a nostalgic song for us because it’s amongst the earliest songs that the band explored playing together. It was around this time that we were really getting into guitar pedals too and trying to make as full and as exciting a sound we could in a live setting.”

The appropriateness of the full-circle timing is not lost on the band, who share that: “listening back to the recording reminds us of those formative years when we were learning to arrange our songs for a live setting and becoming closer as friends and as a band.”

PRAISE FOR THE LAZY EYES

“Now nostalgia aficionados don’t have to root around in cool vinyl sections to discover the past, because The Lazy Eyes are the future.”
The Line of Best Fit

“A pristine psych-addled slice of guitar pop, complete with undulating piano chords and some gorgeous, watery effects on the guitar.”
Clash Music

“A stellar burst out of the gates from a band with a hell of a lot of promise ahead of them.”
Pilerats

“Sydney foursome The Lazy Eyes are still in their late teens, but possess a musical depth beyond their years.”
Tone Deaf

“You know when you listen to a song or an artist and you don’t know exactly why or how, but you can feel something special. This is a prime example of that”
Declan Byrne (triple j Unearthed)

“The hype is real. Believe it.”
Life Without Andy

EP1 by The Lazy Eyes is out now – buy/stream it here. 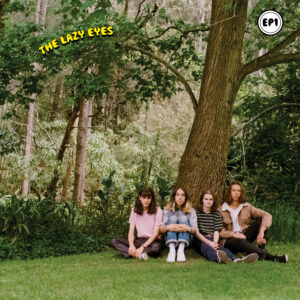 Stay connected with The Lazy Eyes: