Brisbane’s hardcore outfit Headwreck are back and demanding attention with their latest offering ‘Good Grief‘. This sophomore single also welcomes a fourth member into the mix, Callen Batson on bass guitar, who also fronts Brisbane band Days Like These.

‘Good Grief’ sees Headwreck return to form to further establish their hardcore sound. The track wasproduced, mixed and mastered by resident Headwreck guitarist Jamo Benadie and narrates hitting low points in life and reflecting on feelings of bitterness, heartbreak, betrayal and grief. Vocalist Connor Hickman explains “we are always told that there is light at the end of the tunnel, but this song ultimately focuses on the fact that sometimes it feels like there really isn’t.”

‘Good Grief’ comes complete with an accompanying music video shot by Brisbane cinematographer Andrew Vaughan. The video ties the theme of the track together with its visual counterpart – Hickman says, “our protagonist is chased by an entity, who is forcing upon her items that are distressing – just as some situations can force upon us distressing feelings.”

The band went above and beyond to capture the darkness and the mess that one experiences inside their head when facing inner demons, “The video shoot was not supposed to get nearly as messy as it did,” tells Hickman. “Everyone was so into the shoot but towards the five hour mark Emily (protagonist) and Harrison (entity) were covered in sludge, sharp fake glass and God knows what. Neither of them talked to me for a couple days after, and I don’t really blame them for it!”
Headwreck is Connor Hickman (vocals), Jamo Benadie (guitar) Sam Conroy (drums) and newest member Callen Batson (bass). The trio are excited to officially welcome Batson to the team after having been a part of the band behind the scenes for some time prior. Headwreck is the result of four local musicians and friends pooling their brutal talents and their collective experience from previous established bands together to start fresh, and on a massive high note to boot. 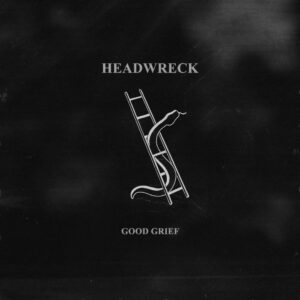 Headwreck debuted in late 2019 with ‘As Is‘ ft. Luke Harriss of She Cries Wolf. ‘As Is’ premiered at HEAVY Mag, who dubbed the track a “hardcore, kick-arse, take no prisoners song“. ‘Good Grief’ kicks things up a notch and is available now to stream and purchase at all good online outlets and streaming platforms!