A BRIEF INQUIRY INTO ONLINE RELATIONSHIPS

Just days before they send fans worldwide into a feeding frenzy by dropping their obsessively anticipated third album A Brief Inquiry into Online Relationships, English pop mavericks The 1975 have tipped their hat to their legion of followers in Australia by locking in a huge run of 2019 shows.

Stopping in Melbourne, Sydney, Brisbane, Adelaide and Perth, the tour will mark the band͛s first trip to Australia since January 2016, when front-man Matty Healy and his troops were just about to release their wildly popular and critically adored second recordI Like It When You Sleep, for You Are SoBeautiful yet So Unaware of It.

Certified Platinum in the UK, Gold in the US and hitting Number 1 in countries all over the world (including Australia), I Like It…͛was best described by Drowned in Sound as a͞ bold body of work that sounds effortless and odd and sophisticated.͟

Hailed as 2016͛s NME Album of the Year, it skyrocketed The 1975 into rare air occupied only by some of the biggest bands in the world. Tracks like͚ Love Me͛,‘The Sound͛ and͚ Somebody Else͛(just three of the staggering seven singles taken from the record) showcased the bands knack for razor sharp pop hooks which frame Healy͛s impassioned vocals and dramatic lyricisms with inch-perfect precision.

If that sounds a bit complicated: it͛s really nothing when compared to the campaign of mystery, innuendo and misinformation that has surrounded The 1975 since they wrapped up touring commitments on I Like It…

Forever keeping the fans guessing, the quartet has repeatedly teased new material, tossed out cryptic comments, broken up and reformed (although this may have been a joke), hidden zip files in posters, changed release dates and basically done everything in their significant power to whip up the tumbling waves of anticipation beating down on them on the eve of the album͛s release.

All going to plan then, The 1975 will hit our shores in 2019 with two albums of new material to show off. As they command some of the finest venues in the Southern Hemisphere (including Brisbane͛s iconic Riverstage and Adelaide͛s spectacular AEC theatre) they will do so as a band at the absolute peak of their powers.

A BRIEF INQUIRY INTO ONLINE RELATIONSHIPS 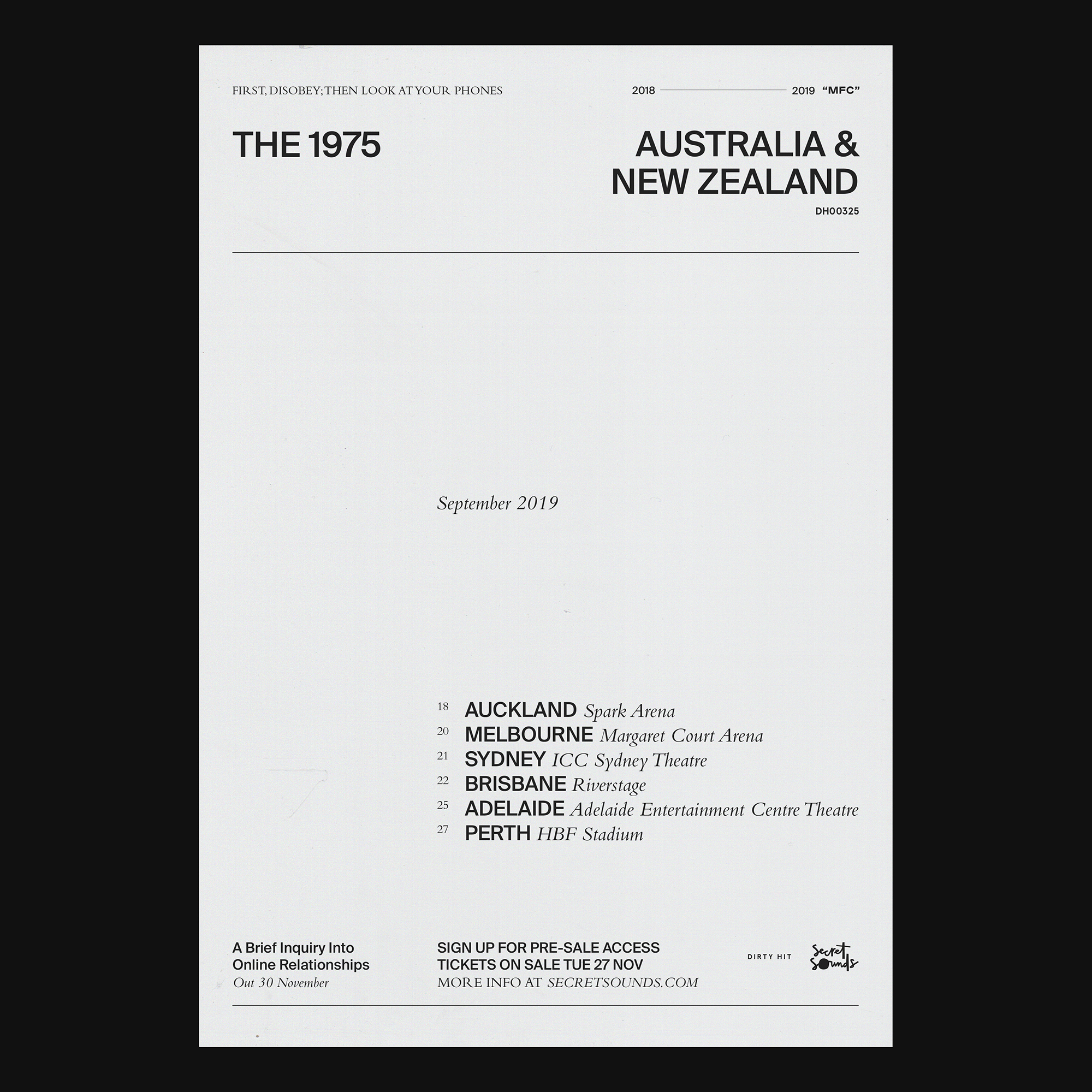