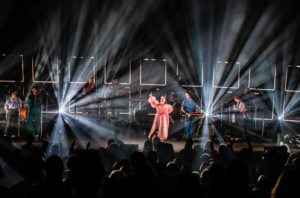 Fans are encouraged to host their own private watch parties with friends for the premiere.  More details can be found at sylvanesso.com.

Watch the WITH trailer below:

Of the project, the band explains, “We knew that in order to put on the best show we possibly could in a few short weeks we had to truly lean on and trust the friends we had asked to become part of our band. The end result – as with so many communal efforts – was much greater than the sum of its parts, in ways we could have never dreamed of. The world has completely shifted in a few months – the idea of togetherness rings in a different way. It was such a special moment that now feels like a signpost of how things were and how they could be again.”

Orchestrated with an army of synths, saxophone, two drummers and intricate three-part vocals provided by Amelia with her Mountain Man bandmates, WITH showcases several of Sylvan Esso’s most beloved songs from their studio albums, Sylvan Esso and What Now: “Die Young,” “Coffee,” “Radio,” “Rewind.”  The WITH band transformed these tracks into a more interactive and ever changing experience that opened up the idea of what a Sylvan Esso song could be. The film also captures the intense two weeks of preparation and rehearsing that preceded the tour, a home movie of sorts for this newly united creative family.

Sylvan Esso is Amelia Meath and Nick Sanborn, both from Durham, NC. They’ve released two albums, 2014’s self-titled debut and 2017’s What Now, both of which entered the Billboard 200 Album Chart. The GRAMMY-nominated group has performed on Fallon, NPR’s Tiny Desk, and top festivals including Coachella, Lollapalooza, Austin City Limits, and Eaux Claires. Paste named “Hey Mami” the No. 1 song of 2014, and a 2017 New York Times feature declared: “Sylvan Esso Keeps Electronic Pop Human.” In 2015, they recorded “Jaime’s Song” for NPR’s Radiolab as a way to explore and understand bipolar disorder.