Recently relocating to Melbourne from her hometown of Darwin NT, Stevie Jean today announces her debut album ‘The Dark’ (slated for release May 14th) along with lead single “Menace”

Shedding herself of preconceptions with a little healthy chaos and destruction, and effectively grabbing her own life and music by the teeth, “Menace” is an edgy, frenetic, explosive force to be reckoned with.

Squealing guitar riffs paired with a thunderous drum beat, and Stevie’s growling verses and vibrant high notes building into repetitive chants of “we do what we wanna do” at the song’s crescendo make “Menace” a multi-faceted but undoubtedly huge statement from the 21 year old.

Recorded in live takes at Darwin institution Studio G and mixed with the raw power of the original vocal stem, Stevie  takes cues from classic rock icons such as Suzie Quatro and Joan Jett – capturing a three-minute burst of fierce rebellious energy in musical form, and a taste of what to expect from her upcoming debut album.

Due for release on May 14th, ‘The Dark’ will be Stevie Jean’s debut full length album release, and an opportunity to explore a series of themes over a longer format than ever before.

Described by Stevie as “a concept”, the album delves into her adolescent ideas and experiences written from the age of 17 to 21 through the lens of fairy tales and pop culture:

“I was always scared of the dark as a kid. Don’t get me wrong, I loved it too. Adolescence brought with it the darkness that Johnny Cash sang about. Those feelings that have been broken into so many individual parts.
Anxiety, depression, the blues, melancholy, bittersweetness, low self esteem, rage, pity, lust, gluttony, envy. So many shattered pieces of glass emotions that can be pulled apart and made clinical to examine and explain.
Personally, I’m someone who feels deeply on an extreme scale.
I just call it “The Dark.” – Stevie Jean

Stevie Jean has previously released her own EP ‘Blame Game’ in 2019, as well as collaboration EP ‘Evenings’ with Tasman Keith later that same year. ‘The Dark’ will be her first full length album release.
“Menace” (single) is out now Official cover artwork below // Debut album ‘The Dark’ will be released May 14th. 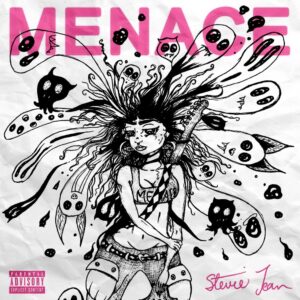