‘HELP ME HELP YOU’

Stepson – Brisbane’s most high-octane punk/hardcore outfit, are today announcing some details surrounding their highly-anticipated debut full-length album! The album, entitled “Help Me Help You” will be released worldwide in U.S. Summer/Australian Winter through SharpTone Records. Along with this announcement comes brand new music in the shape of new single and video ‘Run’! The Single will be available for purchase and stream at https://shrptn.co/run from Friday March 20.

The band, who sport 30 000 monthly listeners on Spotify and over 8,000 followers there, have dropped this new single ‘Run’ and it’s accompanying video, Produced and Directed by Crystal Arrow Films, today. The ‘Sin City’-inspired video, shot in stark black and white with splashes of colour, sees a bar patron, with demons of his own, exacting retribution on another bar patron for his behaviour towards women, all set to the backdrop of Stepson’s hometown, Brisbane.

Jayden Ridley, bassist/vocalist for the band, sais that ““Run” is the resolve of our protagonist featured in Never Mind Me / Come With Me and how they’ve dealt with the hardships of broken homes, damaged relationships and the lengths we go to to protect the ones we love. It is a darker endeavour featuring the trademark guitar melodies and complementary vocal harmonies developed over previous releases with some exciting new elements fans may not have heard from us before.”

Stepson pride themselves on having high energy, honest lyrics and emotive music. Kicking everything off in 2014, Stepson have gathered an amazing following around Australia through hitting the road and playing every show they could, and always having time to meet fans. 2015 saw them release their sophomore EP titled ‘Echoes In An Empty Room’, 2016 produced one single (Never Mind Me) and a 3-track EP (The Beautiful Lie) and in 2017, they dropped single Come With Me. They went quiet from there to write was become ‘Help Me Help You.’

Along the way, Stepson have been given the chance to share a stage with acts such as Polaris, In Hearts Wake, I Prevail, While She Sleeps, Counterparts, Stray From The Path, Ocean Groveand Hellions.

STEPSON – HELP ME HELP YOU – OUT U.S. SUMMER/AUSTRALIAN WINTER 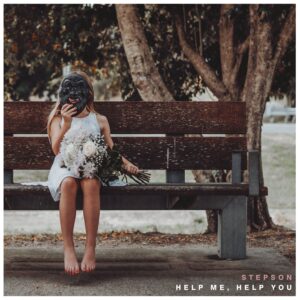