Channeling the heart-on-your-sleeve, alt-rock energy of Foo Fighters and the melodic punk sensibilities of State Champs and Trophy Eyes, “Heat Wave” acts as the four-piece’s bold statement on positivity. The summery track ebbs and flows between a driving centrepiece riff and a pummeling chorus with vivid lyrics that rally cry for empowerment.

“‘Heat Wave’ is ultimately about hope and acceptance – that positive energy is what we strive to exude as a band,” said frontwoman, Bianca Davino. “Lyrically the song is about empowering yourself to understand the beauty in all aspects of life, and we really aimed to channel that drive and brightness in the instrumental.”

The music video for “Heat Wave”, directed by Billy Zammit, is a showcase of the palpitating, frenetic energy Grenade Jumper exudes as a band; cutting between sleek shots of each member, the video builds with fiery tension before exploding in colour and life.

Emerging onto the scene in 2018 with their upbeat debut single “Get Ahead”, the band garnered enviable buzz from triple j unearthed, featuring alongside Redhook and Yours Truly as part of  triple j’s ‘Trendsetters’ feature which focused on Australia’s buzz-worthy pop punk scene.

“We’ve just started playing their music on Unearthed radio, and it has all the hallmarks of great pop-punk: crunchy chords, heaps of energy, and a really memorable melody at the forefront,” said triple j Unearthed’s Max Quinn.

The band followed up with the nostalgic hit “Gazed”, which premiered on triple j’s Home and Hosed and propelled them to the forefront of the genre’s consciousness, receiving praise from Don’t Bore Us, Depth Magazine, Ticketmaster, Wall of Sound and love from triple j Unearthed, FBi Radio, The Faction and more.

Grenade Jumper have been flat out playing gigs ever since, cutting their teeth and honing their live show chops sharing the stage with the likes of Deaf Havana (UK), Hellions, Between You and Me, Eat Your Heart Out, Whatever Forever, Waxflower, Introvert, The Dead Love and more. 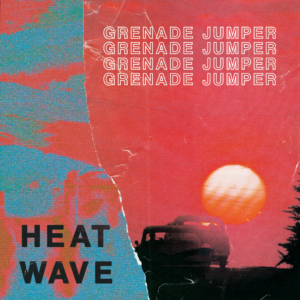 “Heat Wave” is available to stream on all platforms now!

“It’s clear that Grenade Jumper are destined to become the ringleaders of the next generation of pop punk in Australia.” – Don’t Bore Us
“The emotional tone and weight hidden behind those instruments are what stands out with Grenade Jumper.” – Depth Magazine
“The vocals are incredibly well done and the music is hard as hell.” – Mitch Alexander (triple j)
Follow Granade Jumper Here: