LOVE & PEACE TO BE RELEASED

Seasick Steve is set to release his new album, Love & Peace, on 24 July 2020. Originally slated for a May release, the album moves back due to the Covid-19 crisis that has impacted so many others. Steve recently released the first single and title track from Love & Peace, listen here.

Steve commented, “I don’t think any of us could have imagined how it would be in the world right now. I hope y’all safe and taking care of yourselves. Strange times.”

In the meantime, Seasick Steve will digitally deliver his inimitable brand of analogue boogie live once a week. Each Monday morning at 5am (AEST)/7am (NZST), Seasick Steve will live-stream a performance of a different track, live from his Facebook. Watch this week’s live stream here.

Love & Peace sees Steve mixing up all of his much-loved ingredients to deliver a fresh new record that offers the perfect antidote for the troubled times in which we live. Full of hope for the future, it’s a great mix of boogie, blues, rock, Americana and folk – all delivered in Seasick Steve’s unique style.

Produced and written by Seasick Steve, this album sees him breaking with tradition. While some of it was recorded in his barn, the majority was recorded in Los Angeles at Studio 606 and at East West Studio 3. The album was mixed by Vance Powell (Jack White, Chris Stapleton) and Steve at East West.

Steve’s long-term drummer Dan Magnusson (a.k.a. Crazy Dan) is of course featured on the record, along with some amazing contributions from guitarist Luther Dickinson (North Mississippi Allstars) and harmonica player Malcolm Arison (The BossHoss).

About Seasick Steve
Seasick Steve has come a very long way in 12 years since he burst into the public consciousness with an amazingly raw, powerful and emotional performance on Jools Holland’s Hootenanny BBC TV show, becoming a household name overnight. Those astonishing and engaging live performances turned Steve and drummer Dan Magnusson into a powerful force, both live and on record, and they went on to sell over 1 million albums and sold out shows across the world. 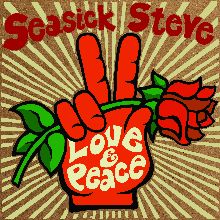