Singer-songwriter supreme Rufus Wainwright announces the release of his long-awaited new album, Unfollow The Rules which arrives today via BMG.  Listen to UNFOLLOW THE RULES

To announce the album, Rufus has shared the video for Devils and Angels (Hatred) which was directed by the singer’s husband and co-manager Jorn Weisbrodt, with costumes by renown designer Zaldy. Watch DEVILS AND ANGELS (HATRED)

Wainwright says of the song, “My Queen moment? I wouldn’t go that far, but ‘Devils and Angels (Hatred)’ is the single and I think it’s an important song. It’s about what’s going on in the world today. We’re in the midst of a ‘war’ that has to be won and to do that requires a dog spirit, a triumphant attitude. The concept comes from an opera I saw in Italy with my mum many years ago – Gluck’s Armide, premiered merely 10 years before the French revolution. There’s an amazing scene where the main character has to summon hatred in order to save herself. She sings an aria and hatred rises. Of course, hatred isn’t great, but it’s not all negative. It is an energy required in battle. That’s my sister Martha Wainwright on backing vocals. All of my albums have a Martha moment and this song required the big guns!” As for the video he remarks,“We shot the video on the last day before the lock down in California. I think it captures a little bit of that end of the world spirit that people felt when this happened.”

Fans are invited to attend an #UnfollowTheRules VIP Virtual Record Release Party on July 11 at 11 AM PT (for keen Aussies, it’ll be 4am July 12 AEST). Attendees will have a first look at some exclusive one-of-a-kind Unfollow The Rules merchandise, and will get a private virtual concert, including meet and greet and a tour of Wainwright’s Laurel Canyon home. For tickets and special merch bundles, visit rufuswainwrightvip.com.

Wainwright’s ninth studio LP and first new pop album since 2012, Unfollow The Rules finds the artist at the peak of his powers, entering artistic maturity with passion, honesty, and a new-found fearlessness while remaining as creative, bold, and mischievous as ever. Produced by Mitchell Froom (Crowded House, Paul McCartney, Richard Thompson, Suzanne Vega, Randy Newman) at a variety of legendary Los Angeles studios – including Sound City Studios, United Recording, and East West Studios – the album serves as both bookend to Act I of an extraordinary career which, like Unfollow The Rules, began in the studios of Los Angeles, but also now as the first lines of a remarkable new chapter. Inspired by middle age, married life, fatherhood, friends, loss, London, and Laurel Canyon, songs like Only The People That Love and the spirited, symphonic Hatred find the gifted singer-songwriter ready to tackle new challenges, yet compelled to confront his past by making sense of how he has grown both as a musician and the contented family man he has become.

Praised by the New York Times for his “genuine originality,” Rufus Wainwright has established himself as one of the great male vocalists, songwriters and composers of his generation. The New York-born, Montreal-raised singer songwriter has released seven studio albums to date with, three DVDs, and three live albums, including the fantastic Grammy nominated Rufus Does Judy at Carnegie Hall.

Rufus has made a name for himself in the classical music world. His much acclaimed first opera, titled Prima Donna, premiered at the Manchester International Festival in July 2009 and was performed in London, New York, Paris, Buenos Aires, Hong Kong among others. Rufus’ second opera based on the on the story of the Roman Emperor Hadrian and Antinous premiered in October 2018 at the Canadian Opera Company in Toronto and won a Dora Award for Outstanding New Opera.

Rufus has also distinguished himself by playing original orchestrated pop songs, his orchestral settings of 5 Shakespeare Sonnets and pieces from an extensive classical repertoire with orchestras around the world such as the Chicago Symphony, Toronto Symphony, Residentie Orchestra, Orchestre National de lIle de France, the orchestra of the Teatro Real.

He has appeared at many of the world’s greatest concert halls and festivals including Royal Albert Hall, Carnegie Hall, Sydney Opera, Teatro Colon, Hollywood Bowl, the Elbphilharmonie, the Olympia, Glastonbury, Roskilde, and the Kennedy Honors.

He has written and recorded songs for a wide variety of movies and TV shows including Brokeback Mountain, Shrek, Judy, Meet the Robinsons, The Aviator, Moulin Rouge, and Boardwalk Empire.

He and his sister Martha Wainwright continue the legacy of their mother, Canadian folk icon Kate McGarrigle, and raise funds for the Kate McGarrigle Fund funding sarcoma research and a music therapy program.

Wainwright is currently working on a number of films, podcasts and musical projects and lives in Los Angeles with husband Jörn Weisbrodt and shares custody for his daughter Viva with her mother Lorca Cohen.

ACT I
1. Trouble in Paradise
2. Damsel in Distress
3. Unfollow The Rules
4. You Ain’t Big

ACT II
5. Romantical Man
6. Peaceful Afternoon
7. Only The People That Love
8. This One’s For The Ladies (That Lunge) 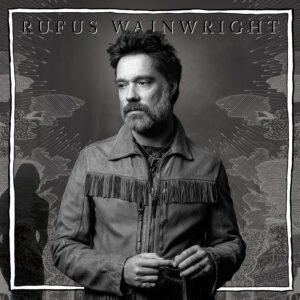