RUDIMENTAL RESCHEDULE ‘TOAST TO OUR DIFFERENCES TOUR’ TO MAY/JUNE 2019

+ NEW ALBUM ‘TOAST TO OUR DIFFERENCES’ OUT NOW

East London luminaries, Rudimentalhave today announced that, due to scheduling conflicts, their highly anticipated Toast To Our Differences Australian tour will be rescheduled for May/June 2019.  The tour will now see Rudimental play Metro City in Perth on May 31, before moving through to Adelaide, Mt Gambier, Brisbane, Sydney, Darwin, and wrapping up at Margaret Court Arena in Melbourne on Sunday June 9. The group have also announced that beloved Australian dance pop group Sneaky Sound System will be on support duties for the tour.  Rudimental’s new album Toast To Our Differences was released Friday January 25.

Sneaky Sound System have been household names in Australia since the mid-2000s, with massive hits UFO,Picturesand I Love It spearheading their 3x platinum self-titled album.  In a swirling midst of albums, tours and multiple ARIA nominations, lead vocalist Connie even lent her voice and lyrics to superstars Kanye West, Jay-Z and Snoop Dogg.  Sneaky Sound Systemtake listeners on a house music journey; from slow chugging burners to groove‐laden euphoria, amplified by Connie’s sublime vocals… it’s the sound of summer.

For those fans who have already purchased tickets, please hold onto them as these tickets will still be valid for the rescheduled shows in the same city.  For any ticket purchasers unable to attend on the rescheduled dates, a refund will be available from point of purchase. Remaining tickets are on sale now (links below).

Speaking on the new tour dates, Rudimental’s Locksmith says, “To our Aussie fans – we’re so sorry we have had to reschedule our trip down under, but we’re excited to see you later in the year – and to be bringing our friends Sneaky Sound System along, too.  It’s going to be a serious party!”

With over 1.4 billion global streams, 20 million single sales, 40 platinum awards, 22 million monthly listeners on Spotify (ranked 55th artist in the world), 700 million YouTube views and a global audience of 1.5 million+ across socials, there is no doubt Rudimental are conquering the world and loving every second of it!  Their brand new album Toast To Our Differences features the single These Days feat. Jess Glynne, Macklemore and Dan Caplen and has racked up more than 2.4million sales worldwide and has been certified triple platinum here in Australia, it comes as no surprise that it was the #1 most played single on Australian radio for 2018. Also featured on the album is the platinum selling single Sun Comes Up feat. James Arthur, radio hit Let Me Live feat. Major Lazer, Mr Eazi & Anne Marie and the title track Toast To Our Differences feat. Protoje, Hak Baker & Shungudzo.

Division Agency are particularly excited to be bringing Rudimental back down under, having enjoyed a long and successful history with the band. They first introduced them to Australian audiences at Future Music Festival back March 2013 where they took the country by storm and proved to be one of the stand out performances that year and in subsequent appearances. 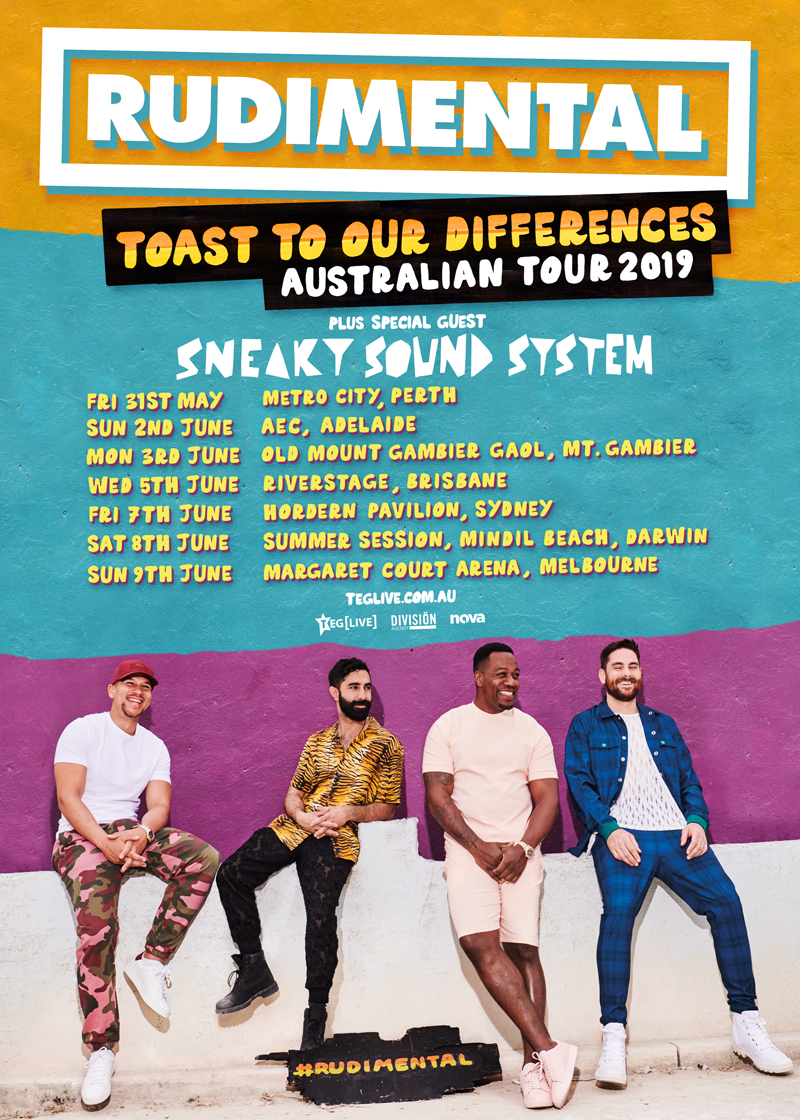