WATCH CARS IN. SPACE BELOW:

Set against the band’s revered world of driving & passionate guitar pop, ‘Cars In Space’ – premiered by Steve Lamacq on BBC 6 Music – follows  the swirling words and thoughts before a break-up. Propelled by the chemistry of the five-piece and totalling 4.58, ‘Cars In Space’ is bold and classic Rolling Blackouts C.F. while hinting at a new chapter to come.

Accompanying the single is the sun-drenched video, directed by Nick McKinlay alongside assistant-director Julia Jacklin. Set in broad daylight at an old-school Australian drive-in, the clip is full of charm, wit & plenty of surprises for Rolling Blackouts C.F. fans.

‘Cars In Space’ is the first glimpse of new music from the band since 2019’s 7”, two-single release of ‘In The Capital’ and ‘Read My Mind’, which followed up the band’s internationally acclaimed 2018 debut album, Hope Downs. Featuring singles ‘Mainland’, ‘Talking Straight’,  ‘An Air Conditioned Man’, ‘Time In Common’ & ‘Sister’s Jeans’ – Hope Downswas embraced by lovers of their early EPs, Talk Tight and The French Press, and new fans alike. The record quickly became one of the most internationally acclaimed Australian albums of the year, appearing in many sought after Best of 2018 lists, coming in at #5 on Rough Trade’s Albums of the Year list, #3 on MOJO’s Album of the Year List (+ was named MOJO’s Debut Album of the Year), #2 on UNCUT’s Albums of the Year, being shortlisted for the prestigious AMP Award & receiving tremendous support from the likes of FBi Radio, PBS, Triple R, triple j, Double J, Pitchfork, The Guardian, Paste Magazine, NME, Rolling Stone US, BBC 6 Music, Stereogum, DIY Mag, and countless others.

Watch this space – 2020 is gearing up to be a big one for Rolling Blackouts C.F. 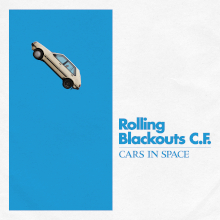