Though news of their forthcoming album Flip Phone Fantasy is out in the ether, Ocean Grove have been tight lipped about its release date. Today the band are drip feeding more visuals from the release however, with the reveal of new single and video ‘NEO’ and the album cover, detailed below.

Just shy of two minutes long, ‘NEO’ (STREAM HERE) bursts out of the gate before spiralling into a wobbly, distorted breakdown and ramping back up again. Bassist Twiggy Hunter, who swaps the bass for frontman duties with Dale on this track, explains that ‘NEO’ is the “sonic boom of bedroom angst”.

“…it’s the fist through the wall to expose what lies on the other side of teenage aggression,” he adds. “It is the learning of one’s depression through anger and confusion and trying to find your place in a world of distortion. It completes the spectrum of human emotions that ‘Flip Phone Fantasy’ seeks to explore.”

In late 2019 Ocean Grove lifted singles ‘JUNKIE$’ and ‘SUNNY’ from the record and have spent the summer touring Australia alongside The Amity Affliction. The band now join metal heavyweights Crossfaith across Europe and the UK and are set to unleash their hotly-anticipated sophomore full-length Flip Phone Fantasy before too long. 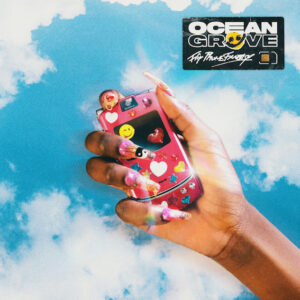