“Our live sound has inspired us to create a bigger energy with our recorded music. Debra was written during the first lockdown and we aspired to bring that festival stage sound to this recording as well as the wider album.” – Rowan

Written as a concept track, Debra tells the story of a cabaret performer re-emerging, footing the stage for the first time in years. The themes of the track mirror the current state of society with the emergence and re-emergence from lockdowns as people return to a new normal.

”The track is about an ageing, once-famous, formerly glamorous cabaret singer who’s stepped on stage for the first time in years and is trying to re-connect with the audience. The singer overcomes doubt by getting lost in a dream of former glory.” – Rowan

Following the release of Debra, Riflebirds have a jam-packed 2021 on the cards with more singles scheduled for release ahead of their 4th studio album – following in the critically acclaimed footsteps of Ain’t Ever Going Home (2018), World Feels Wide (2016), and the debut record Detours & Collisions (2015) 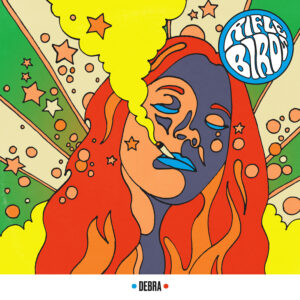