Sydney’s outrageous four-piece, Reliqa, are setting out to scratch the collective itch for passionate, flavoursome and open minded heavy music – and epic new single “Mr. Magic” is the first to be welcomed into 2020 – premiering exclusively through Prog Magazine yesterday.

Produced, mixed and mastered by Brad Telfer Audio, “Mr. Magic” is a direct call out to the powers that be – and it’s on you to point the finger: be it as far as heaven, or as near as the mirror. Disillusioned and frustrated by the configuration and abuse of power in global events, Reliqa have adopted a biting, satirical commentary on the current state of affairs. The message is clear – ignorance is a choice, and the future is not a game to be played. A soaring, scorching anthem built from a deep dedication and burning frustration, this may arguably be Reliqa’s most sophisticated work to date.
Wielding a unique blend of aggressive riffage, powerhouse anthems and stellar modern grooves, Reliqa is Monique Pym (vocals), Brandon Lloyd (guitar), Miles Knox (bass) and Shannon Griesberg (drums). The quartet have been donned “diamonds in the rough” by Wall Of Sound with the chemistry and talent to make for unforgettable performances on and off stage.
November of 2018 welcomed Reliqa’s sophomore EP, ‘Eventide’, which had listeners and reviewers alike floored by the polished professionalism of a humble Central Coast metal outfit, clocking in currently with over a million Spotify streams and counting. Since their inception, the band has already scored themselves a handful of seriously impressive support slots for the likes of prog legends Dead Letter Circus, Voyager and Chaos Divine as well as Sevendust, Bodyjar and 28 Days. On top of this, Reliqa found themselves showcasing twice at last years Bigsound, demonstrating to industry peers and fans their hypnotic live presence. Reliqa continue to receive words of support and acclaim from heavy music fans all over the globe, building themselves a genuinely loyal and fast-growing fanbase.
Official Artwork below 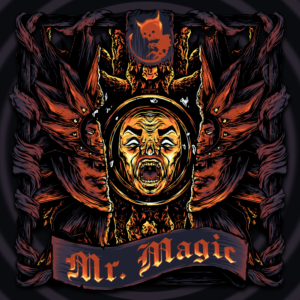 Followers are in luck as we welcome “Mr. Magic” into the world – available now to purchase and stream everywhere! Watch video below: