EXPANDED EDITION OF ALL THAT WE NEEDED

Craft Recordings & Fearless Records announce the release of an expanded edition of Plain White T’s’ acclaimed 2005 album, All That We Needed. This special, 15th-anniversary reissue includes five previously unreleased live acoustic renditions of songs from the album, including “Hey There Delilah,” “Revenge,” “Breakdown,” “Take Me Away,” and “All That We Needed.” Currently available for pre-save, All That We Needed will be available across all major streaming and digital platforms on April 10th. As an early treat, the band have dropped an all-new lyric video for their No.1 hit single, “Hey There Delilah,” available now on YouTube. In recent weeks, the GRAMMY® Award-nominated single has been embraced by a new generation of listeners, who have been putting their own, timely twist on the song, and offering some much-needed smiles, amid the coronavirus pandemic.

Watch the all-new lyric video for the album’s No.1 single “Hey There Delilah”
and pre-save the expanded edition of All That We Needed Now

The third studio album from Plain White T’s, All That We Needed, was the Chicago quintet’s breakthrough, and included the original recording of their legendary hit song, “Hey There Delilah.” All That We Needed also marked the first Plain White T’s album to feature the band’s current line-up of singerTom Higgenson, lead guitarist Tim Lopez, rhythm guitarist Dave Tirio, bassist Mike Retondo, and drummer De’Mar Hamilton. For their sophomore effort with Fearless Records, the group turned to producers Ariel Rechtshaid (HAIM, Vampire Weekend, Usher) and Loren Israel (Jimmy Eat World, Less Than Jake, Sugarcult), who helped the band concoct a collection of infectious songs. Leaning further into power-pop territory, All That We Needed found the five-piece exploring new sonic textures, and expanding beyond their emo and pop-punk roots.

Upon its release in January of 2005, All That We Needed garnered acclaim from outlets like AllMusic, who praised that its songs recalled, “Great lost bands like the Producers, the Ravyns, and the Romantics.” The album’s standout track, “Hey There Delilah,” was released as the album’s third single in May 2006. As it picked up steam, the band re-recorded the track, augmenting the ballad with a string section from cellist Eric Remschneider. The single swiftly rose up the charts – peaking at No.1 on the Billboard Hot 100. Globally, the song hit No.1 in Canada, No.2 in the UK, and entered the Top Ten in territories around the world. Bolstered by the single, All That We Needed was certified Gold by the RIAA.

“Hey There Delilah” – which has since gone on to sell over four million copies in the US alone – was named one of the “10 Best Songs of 2007” by Time magazine, and one of the “100 Greatest Songs of the ’­00s” by VH1. In 2008, the single was nominated for two GRAMMY® Awards (Song of the Year, Best Pop Performance by a Duo or Group with Vocal).

Since then, Plain White T’s have continued to amass an enduring, engaging, and enigmatic catalog, including unshakable anthems such as the double-platinum “1,2,3,4” and the platinum “Rhythm of Love.” Along the way, the five-piece have logged countless miles on the road in front of sold-out crowds in nearly every corner of the globe, while in 2018, they released their eighth studio album, Parallel Universe.

Most recently, the band had been gearing up for an extensive tour of the UK and Europe, set to kick off at the end of March. Following suit with numerous acts around the world, the group cancelled those dates, in light of the global COVID-19 crisis, while their forthcoming appearances in the US have been postponed. In the meantime, the band has been taking to socials for performances and live chats, taking the opportunity to connect with fans from home. Follow along at @plainwhitets for more live stream events, coming soon. 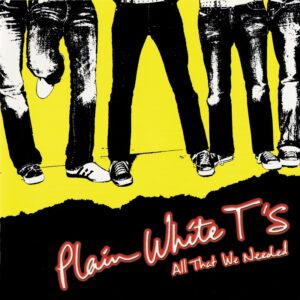