Grammy Award-winning indie-rock band Phoenix have revealed a new single titled “Identity”, taken from the soundtrack of Sophia Coppola’s upcoming film ‘On The Rocks‘, starring Bill Murray and Rashida Jones, due to be released later this year. The glitzy, synth-driven pop track is an instant earworm, infused with gorgeous anthemic layers and an insanely danceable beat.

LISTEN TO “IDENTITY” HERE
The track was written and recorded in Paris. In addition to contributing “Identical” to the end credits of the film, Phoenix have written the score and assembled its soundtrack. This is their fifth cinematic collaboration with Coppola since she first used their song “Too Young” in ‘Lost In Translation’.

WATCH THE TRAILER FOR “ON THE ROCKS” HERE

Both the song and video are dedicated to the band’s dear friend and long term collaborator, Philippe Zdar, who passed away last year. The band have shared an accompanying video for the track directed by Roman Coppola, who previously helmed videos for their songs “Funky Squaredance”, “Long Distance Call”, and “Everything Is Everything”. 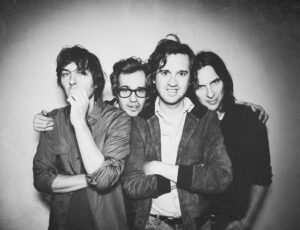 With a career spanning two decades, the French dance-rock band have consistently found themselves placed among the world’s most loved indie acts. Their debut album United launched the four-piece in 2000, featuring a guest appearance from ThomasBangalter (Daft Punk) and production work by Philippe Zdar (Cassius). The group’s mainstream breakthrough came with 2009’s Wolfgang Amadeus Phoenix, also produced by Zdar, which became a worldwide hit thanks to hit singles “1901” and “Lisztomania”.

Now with six albums under their belt, the band have excited fans in 2020, teasing a follow up to their latest Italian summer-inspired disco-funk record Ti Amo.

Identity” is now available on all streaming services.