PREPARE FOR THE RELEASE

OF THEIR DEBUT ALBUM

‘AN ODE TO ODIOUS’ WITH

Firmly establishing themselves as a bright force in indie rock music out on the West Coast, Perth’s Big Orange return with their third release for 2020, ‘I Wanna Know’. Taken from the band’s forthcoming debut album An Ode To Odious, Big Orange’s new single comes packed with strong tempos, instrumentation and heart alike.

Led by vocalist and songwriter Daniel Davis, ‘I Wanna Know’ is delivered with passion and dedication to not just producing catchy hooks and melodies, but landing that alt-rock power punch in the lyrics reminiscent of contemporaries including Something For Kate, Sonic Youthand Cloud Control.

Already a favourite with fans in the live space, ‘I Wanna Know’ has Big Orange operating at their most dynamic – a dynamism that is on show strongly throughout An Ode To Odious. Between Davis, bassist Tom Garvey, drummer Jamie Gallacher and synths/multi-instrumentalist Emma Adams, Big Orange pull together a wide range of influences together with songwriting that is both intensely personal and wide reaching.

‘I Wanna Know’ toes this line of personal and the more existential, as Davis ponders the bigger questions of the universe. “It feels good to be letting this track loose. It’s a song about ruminating on life and death, mostly death; Daniel has an unhealthy fixation with dying. It always goes down well in our live set and it’s great fun to play.” Big Orange

2020 has been a busy year for Big Orange, despite the band being unable to tour outside of WA. The band has released two singles already in ‘Apocketlipstick’ and ‘The Reason’, both further demonstrating the band’s collective strength as musicians. Having supported the likes of Jack Ladder and Jebediah in recent years, Big Orange have been cultivating a strong following for themselves out West. And looking forward to 2021 with the release of Ode To Odious, Big Orange are aiming to take their music further around the country as soon as they’re able.

“There’s something really exciting about Big Orange and throughout 2020, despite everything going on, we’ve had the opportunity to see that begin to blossom.”
Pilerats

“Big Orange come off like some of the best power-popsters such as The Posies combined with the rollicking feel and dry wit of Ben Folds.”
Amrap (Australian Music Radio Airplay Project)

“They could be the next big thing out of WA, everyone could be talking about Big Orange.”
FBi Radio, Al Grigg 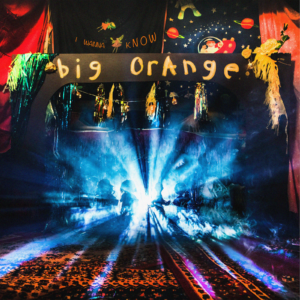 ‘I Wanna Know’ is out now!
An Ode To Odious is released Friday, November 27th.