Brazilian artist, activist, world-renowned drag queen, and cross-cultural icon Pabllo Vittar shared the collaborative release of her new single ‘Tímida’ featuring Mexican singer, actress, and businesswomanThalía yesterday and the video for the track arrives today. Listen and watch HERE. The two Latin divas have come together on their first-ever collaboration which has led to one of the most anticipated partnerships in pop music. ‘Tímida‘ serves as the first single from the second installment of Pabllo Vittar’s forthcoming trilingual album 111 and showcases the duo’s lively and dazzling style melded into an expressive celebration of sexuality.

The neon-hued visual directed by Gustavo Camacho depicts the unique and vibrant personalities of Pabllo and Thalía as they’re being watched by big brother’s inquisitive lens. The two create an atmosphere full of energy, dynamic dancing, special effects and radiant costumes that help reinforce the celebration of their sexuality found within the powerful lyricism of the song. Speaking on the collaboration, Pabllo shares “Working with Thalía was very special. It is an honor for me to have her in my album. She is a true queen who participates in the entire work process. I look forward to seeing people dancing and expressing themselves through our music” with Thalía commenting “I loved being with Pabllo. She has charisma, talent, she is skillful, a real pop diva. We had so much fun working together. The video clip is sexy, caliente [hot], with a lot of choreographies… I am sure it will inspire many women to feel sexy and empowered.”

Pabllo Vittar has previously released ‘Amor de Que,’ which was named as one of the official themes of this year’s Carnival season. Her performance at Carnival made a strong impression as all five shows garnered an extensive number of attendees, with her block-party drawing in roughly over a million fans. Pabllo recently made her Australian debut at Sydney Mardi Gras, performing alongside Dua Lipa, Sam Smith, and Kesha, accumulating praise from well-known publications like Vogue Australia. Stay tuned for more news to follow as the Brazilian superstar prepares to release her new album and stream/watch her music below!

Tímida’ featuring Thalía is out now, buy/stream it here. 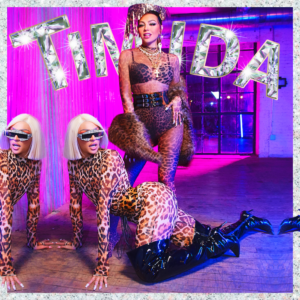 ABOUT PABLLO VITTAR:
Brazilian drag queen and singer-songwriter Pabllo Vittar is a 25-year-old Latin Grammy nominee, MTV EMA’s Award-winner and a “Next Generation Leader,” according to TIME Magazine. In 2017, Pabllo released her debut album Vai Passar Mal that included ‘K.O.’ and ‘Corpo Sensual’, both peaking #1 in the Brazilian market. In 2018, her second album Não Para Não was released and broke the record of the most streamed album on Spotify Brazil in the first 24 hours with all tracks charting on the Spotify Top 40.

Pabllo Vittar is currently the most followed drag queen on social media worldwide and is #1 on VEVO and Spotify globally. In addition, Pabllo was the first Brazilian artist to ever perform at the MTV Europe Music Awards. She entered the Billboard US ‘Social 50’ rank and starred in campaigns for international brands such as Coke, Trident and Calvin Klein and has been highlighted by major international media outlets such as Billboard, The New York Times, The Guardian, Vogue, Gay Times, Rolling Stone, Paper Magazine and GQ.

“This openness to surreal sounds, combined with an innate swagger and a transnational perspective, is precisely what makes Vittar an emblematic pop star of our time.”
Rolling Stone

“Pabllo Vittar Is the World’s Most Popular Drag Queen, and in Brazil, That’s More Important Than Ever.”
VOGUE

With over 2 billion streams and views combined, Pabllo Vittar has joined forces with international acts, including Charli XCX on ‘Flash Pose’, Major Lazer & Anitta on ‘Sua Cara’, Lali on ‘Caliente’ and Sofi Tukker on ‘Energia’ – just to name a few!