‘MODERN ANXIETY’ TO BE RELEASED

A pulsating, dancefloor-filler, ‘paper moons’ follows the release of previous singles ‘modern anxiety’ and ‘in the afternoon’, along with album tracks ‘alone’ and ‘playground love’. The song seeks to address issues around sex and drug use within the queer community, and candidly narrates trying to love someone struggling with addiction and the ensuing frustration and resignation when they refuse to accept help or help themselves.

“In this case the addiction was an insidious, creeping cocktail of drugs and sex, that can creep up on people, and the song was written after one particularly harrowing early morning call from a dear friend I had once loved who had just left the last apartment of the night and, still high but coming down, was in floods of tears, full of regret, with a profound sense of loneliness and shame. It was a lot, and when the call finally ended, I walked straight into the studio and the song was written within the hour”, says Josef.

Josef’s new record modern anxiety bursts with vitality, honesty and despair, and catalogues the tempestuous love-life which he traced during his twenties – affairs with men and women, short and long, torrid and true, looking for physical and cerebral love, often in all the wrong places. It was produced by long-time collaborator Rich Cooper (Mystery Jets, Tom Odell), mixed by Geoff Swan (Ed Sheeran, Grimes, Years & Years, Haim), and assisted by Niko Battistini (Charli XCX), with every track written by Josef himself. The songs pulse circuitously around his oft-times desperate search for identity, never quite touching a conclusion which feels a whisper out of its author’s anxious reach.

Josef first burst onto the international music scene in 2014 with the dark, brooding electropop of ‘Hustler’. He went on to release the critically acclaimed debut album Night Swim while quietly becoming an underground hero as a featured vocalist on tracks with the likes Gryffin and Tourist among others. He has sold out multiple tours in the UK and Europe where he also scored a #1 airplay record for ‘Open Season’, a gold record for ‘Diamonds’ and a gold album for Night Swim in France.

Never before has modern anxiety been more relevant than it is right now. 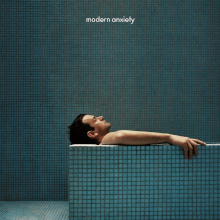