As IRL Pride festivities around the world have been put on hold due to the worldwide pandemic, Brazilian artist, activist, world-renowned drag queen, and cross-cultural icon Pabllo Vittar has embraced the spirit of pride and announced an international virtual experience: ‘Pride With Pabllo & Friends’.

“I’m excited for you all to join me and my friends as we honour and celebrate Pride together. It’s going to be a party, but we will continue to spread the message of inclusivity and love because no matter what anyone says; Pride is not canceled! Remember babies, that LGBTQ+ rights would not exist today if it weren’t for the black community and contributions from activists. We must celebrate the brave people that fought for our rights and must continue to push forward until we all have equal rights – because Pride is a fight against discrimination and a stride towards justice for all. Happy Pride and remember black lives matter!” says Vittar. 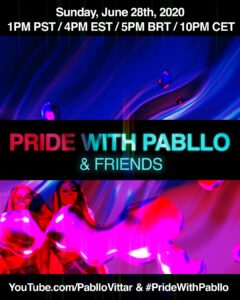 ABOUT PABLLO VITTAR
Brazilian drag queen and singer-songwriter Pabllo Vittar is a 25-year-old Latin Grammy nominee, MTV EMA’s Award-winner and a “Next Generation Leader,” according to TIME Magazine. In 2017, Pabllo released her debut album Vai Passar Mal that included ‘K.O.’ and ‘Corpo Sensual’, both peaking #1 in the Brazilian market. In 2018, her second album Não Para Não was released and broke the record of the most streamed album on Spotify Brazil in the first 24 hours with all tracks charting on the Spotify Top 40. Pabllo Vittar is currently the most followed drag queen on social media worldwide and is #1 on VEVO & Spotify globally. She entered the Billboard US ‘Social 50’ rank and starred in campaigns for international brands such as Coke, Adidas, Sky Vodka, & Calvin Klein and has been highlighted by major international media outlets such as Billboard, The New York Times, The Guardian, Vogue, Gay Times, Rolling Stone, Paper Magazine, & GQ. With over 3 billion streams and views combined, Pabllo Vittar has joined forces with international acts, including Charli XCX on ‘Flash Pose’, Major Lazer & Anitta on ‘Sua Cara’, Lali on ‘Caliente’, and Sofi Tukker on ‘Energia’ – just to name a few!

ABOUT THE TREVOR PROJECT
The Trevor Project is the leading and only accredited national organisation providing crisis intervention and suicide prevention services to lesbian, gay, bisexual, transgender, queer & questioning (LGBTQ) young people. The Trevor Project offers a suite of crisis intervention and suicide prevention programs, including TrevorLifeline, TrevorText, and TrevorChat as well as peer-to-peer social network support for LGBTQ young people under the age of 25, TrevorSpace. Trevor also offers an education program with resources for youth-serving adults and organisations, a legislative advocacy department fighting for pro-LGBTQ legislation and against anti-LGBTQ rhetoric/policy positions, and conducts research to discover the most effective means to help young LGBTQ people in crisis and end suicide. If you or someone you know is feeling hopeless or suicidal, our TrevorLifeline crisis counselors are available 24/7/365 at 1-866-488-7386.

ABOUT PLUS1
PLUS1 is a leading non-profit organisation that mobilises cultural leaders to bring visibility, awareness, and funding for social and environmental justice. To date, we have engaged over 150 artists and festivals, including Arcade Fire, Beck, Cage The Elephant, Macklemore, One Republic, St. Vincent, Chrvches, Flume, Zedd, Lykke Li and The National, unlocked $9 million for 250 spectacularly effective organisations; and catalysed millions of fans to take action; registering to vote, volunteering locally, advocating for change with local representatives, and directly funding highly effective and worthy organisations.