“ARE YOU SURE THIS IS FUN?”

Old Haunts is the brainchild of South Coast New South Wales musician/producer Neil Foley. Born a solo project, Old Haunts yesterday premiered new single “Are You Sure This is Fun?” through Wall Of Sound, with a radio premiere earlier in the week at Triple M’s Hard N Heavy. The single is available in all digital stores and streaming platforms at http://ffm.to/oldhaunts_AYSTIF.

Mixed and mastered by Dead Letter Circus legend Clint Vincent with drums and arrangement by Luke Williams, the track boasts addictive riffs, a chugging rhythm and soaring vocals. Foley spoke of what the new single is about. “‘Are You Sure This is Fun?’ is a song written about the struggles of addiction. The ups and downs of the music itself are a direct reflection of the physical and emotional toll taken; the battles we all face when grappling with anxiety and mental health.“

Having spent the last 15 years in alt-rock band Elia Fell with his brother and cousin, playing pubs and clubs across Sydney and NSW, securing a spot on the stage at what used to be Vans Warped Tour, performing at Bushfire relief concerts alongside titans of Australian music and more – Foley’s new sound is a heavier, more refined progression from Elia Fell’s creamy crunch, alt-rock vibe. After losing his mother to cancer in 2017, and battling anxiety and chronic pain for years, Old Haunts’ new tracks are an authentic reflection and a culmination of a huge period of growth and change in Foley’s life.

Foley spent the past few years writing, recording, and working with some of his biggest musical influences, and Old Haunts is an exciting next step for songwriting. Each track feels more complex, more personal, more focused. The sound for Old Haunts is influenced by bands such as Protest The Hero, Coheed & Cambria, Dead Letter Circus, Circa Survive and Deftones.

Watch ‘Are You Sure This Is Fun’ below 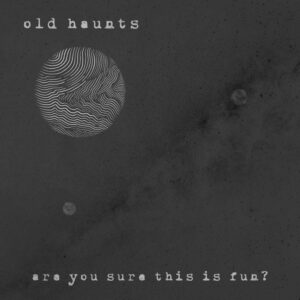